USD/JPY probed 109.25 then dipped to 109.00 overnight and has been steady ever since on a day where a steady hand from the Federal Reserve stabilised markets. At the time of writing, USD/JPY sits at 109.05, slightly up from the early Asia ow of 108.97.

Markets were expecting the Fed to keep its main policy rate unchanged with a target range of 1.50%-1.75%. The decision was unanimous (10-0), as was December’s. Indeed, the central bank repeated its guidance from the December meeting. The Fed is watchful of "incoming data including Global developments in muted inflation pressures." The most dovish thing that Governor Jerome Powell said in the presser was how uncomfortable he is with inflation persistently below 2%. The statement was almost identical to December: 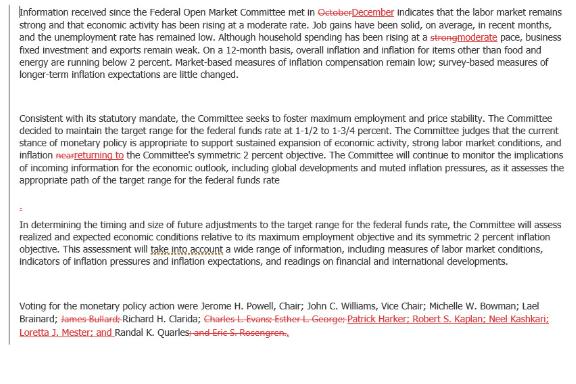 As can be seen, there were some minor narrative tweaks: policy is deemed appropriate to support “inflation returning to the committee’s symmetric 2% objective” (vs supporting inflation “near” the 2% objective). It downgraded its assessment of household spending to “moderate” (vs “strong”).

As for Powell, there was a dovish hint:

As for the coronavirus, China has confirmed 6,065 cases, with 132 deaths. There have been no reported deaths outside China thus far and markets are taking this in its stride.

Valeria Bednarik, the Chief Analyst at FXStreet, explained that "the USD/JPY pair has found intraday support around the 50% retracement of its January rally in the 108.90 area, the immediate support" –

"The 4-hour chart shows that the pair briefly  surpassed a bearish 20 SMA but returned below it, while technical indicators began to ease after entering positive territory, now heading south and reflecting the absence of buying interest. The pair would need to advance beyond 109.30, the 38.2% retracement of the mentioned rally, to be able to extend its recovery and approach the 110.00 figure."

GBP/USD stays mostly unchanged near 1.3015 during the Asian session on Thursday. The pair have recently lost momentum while trading around the key supports.
Read more Next
Start livechat