The EUR/USD major pair gave up on Friday following the release of December’s preliminary Markit PMIs, which came in far below expectations and reinforced the broader market’s opinion that an economic slowdown has officially landed on Europe’s shores. EUR/USD broke 1.1300, a key level that has been acting as support for several weeks, sticking to a low of 1.1270 before a mild sell-off in the US Dollar saw the major pair recover back into the 1.1300 handle to close out the week.

The Euro’s bad beat started on Thursday with a dovish showing from the ECB, which has forecast economic growth to continue decelerating through 2019, and the ECB expects inflation to remain below 2.0% for some time. Business activities indexes helped to accelerate declines, with EU business sentiment contracting sharply to 4-year lows, a reading that was reflected in both German and French business sentiments. The US prelim Markit Composite PMI printed at 53.6 versus the previous 54.7 with the indicator showing its slowest pace of growth since May of 2017, with growth in manufacturing remaining solid but services contracting. US Retail Sales helped to fend off the negative PMI reading with the core reading up by the most in a year.

Monday sees November inflation and trade balance figures for the European Union, and CPI is forecast to decline by -0.2% m/m, while the US calendar has little of note, and the day’s most relevant US data will be the NY Empire State Manufacturing index, forecast to slip from 23.3 to 21.5, and traders can expect the steady onslaught of China-US trade and Brexit headlines to lead the markets into the new week.

The EUR/USD pair finished the week below the daily ascendant trend line coming from the yearly low of 1.1215, technically bearish according to the daily chart, as, after spending the last three weeks hovering around a directionless 20 DMA, it finally moved away from it, with the indicator gaining downward strength around 1.1380. The Momentum indicator turned lower but remains attached to its mid-line, while the RSI heads south around 43, skewing the risk to the downside. Shorter term and according to the 4 hours chart, the technical picture is bearish, as the pair fell below all of its moving averages and with the 20 SMA accelerating south below the larger ones, now around 1.1340, as indicators hold within negative ground with downward slopes, supporting a re-test of the yearly low. 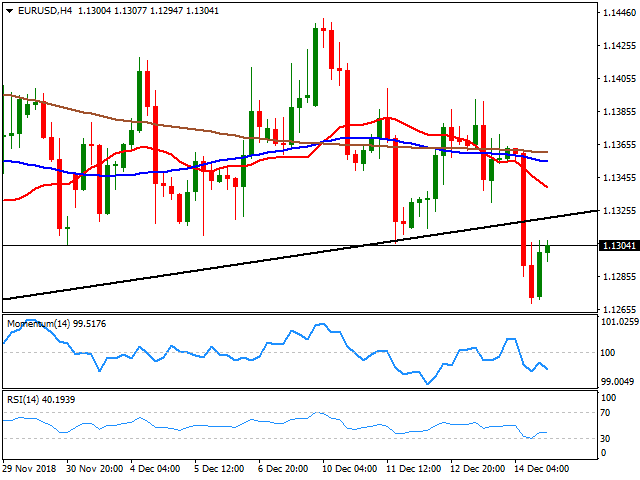 UK consumer spending fell by the most since July - Visa

Britishers tightening their purse strings last month, leading to a 0.7 percent year-on-year drop in spending - the most since July - according to paym
Read more Previous