GBP/USD was the worst performing currency pair on Wednesday, courtesy of the political uncertainty in the UK. The pair hit an intraday low of 1.3086 before closing the day at 1.3112 levels.

The currency was better bid in Asia, despite minor uptick in the US treasury yields.

Fears on "no-deal" scenario are rising

Financial Times reported earlier this week that a group of "large financial institutions with big London operations" had met with US commerce secretary Wilbur Ross to vent their frustrations about the lack of progress on Brexit.

The fears of a "no-deal" scenario are on the rise. The deadlock over citizens' right seen yesterday is just another example of negotiations hitting the wall.  Thus, the British Pound may remain under pressure. 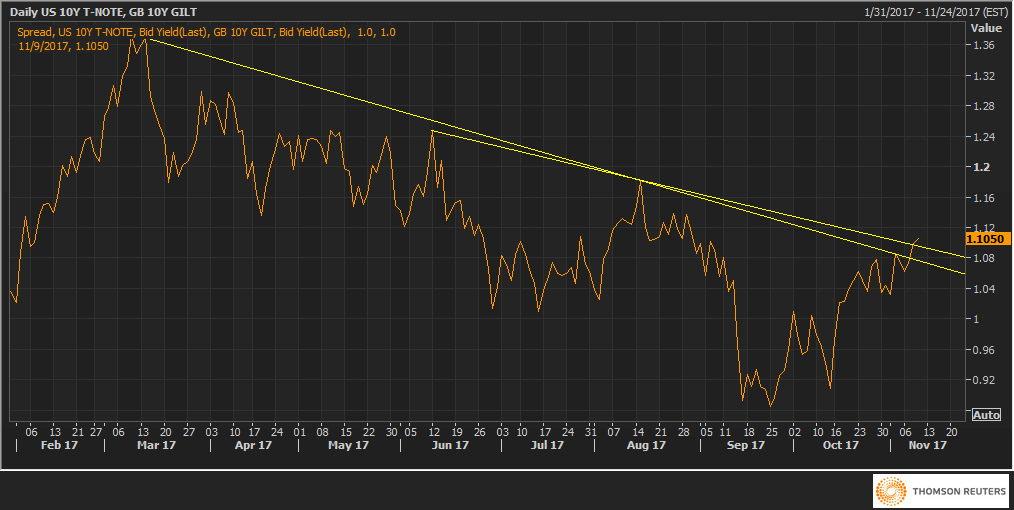 The above chart shows, the 10-year US-UK yield differential has breached the falling trendline hurdle, opening doors for further GBP-negative rise in the yield spread.

Thus, odds of a break below 1.31 levels are high. Only a significant drop in the 10-year treasury yield and/or breakthrough in Brexit negotiations could yield GBP rally.

FXStreet Chief Analyst Valeria Bednarik writes, "in the meantime, the risk has turned towards the downside, as the price is back below its 20 SMA in the 4 hours chart, which maintains a modest bullish slope, while the Momentum indicator is crossing its mid-line with a strong bearish slope, as the RSI turned flat around 42, all of which favors a new leg lower on a break below 1.3090 the immediate support."

The rally in the dollar index from the September low of 91.13 appears to have stalled around the resistance offered by the trendline sloping downwards
Read more Previous

EUR/USD: Range-trade to remain intact ahead of US tax plan

The EUR/USD pair extends its 20-pips side trend into Asia, unable to find a clear direction amid a lack of fresh economic news from both continents an
Read more Next
Start livechat