FXstreet.com (San Francisco) - Finally, the EUR/USD has closed the week with a new test at 1.3000 on the back of the latest developments in Cyprus. After a week providing drama, Cyprus has approved 9 bills as first step to get the EU bailout. Now they are pretending being an efficient parliament while building a credible plan B that Cyprus must show in a new eurogroup meeting on Sunday.

"Is Cyprus just a road bump?" asked BK Asset Management's analyst Kathy Lien, pointing that "currencies and equities traded higher today on the hope that the problems in Cyprus will prove to be only a minor road bump in the long road to recovery for the Eurozone and the global economy."

Late Friday, the Cypriot Parliament approved bills on solidarity funds and capital control, but delayed the vote on the levy to next Saturday, and with the EU group meeting in Brussels on Sunday, next week opening could again start with gaps all across the board. According to Valeria Bednarik, “the EUR/USD has reflected investors’ sensitiveness to news this Friday, moving on headlines rather than on technical readings. And the pair will likely remain headline-leaded next week. However, the pair was unable to break above a daily descendant trend line coming from 1.3710, currently around 1.3010, daily high, and without a break higher, there’s little room for advances.”

She also adds: “daily charts maintain a strong bearish tone, and whatever is the outcome of current crisis, the fact is that European situation is far from optimistic. Technical readings reflect so: upward movements may extend up to 1.3140, this month high if the outcome is positive, thus selling interest around the level should halt the advance. Renewed selling pressure below 1.2840/80 price zone on the other hand, will only support the dominant trend and favor a bearish continuation with past November 2012 monthly low at 1.2660 then at sight.”

From a technical point of view, the EUR/USD had a pretty uneventful day, situation that extended in fact since the week started. 1.2880 has proved to be a strong static support level as the pair managed to bounce higher from there over the last few days, although sellers remain aligned in the 1.3000, confining the pair to a tight range. 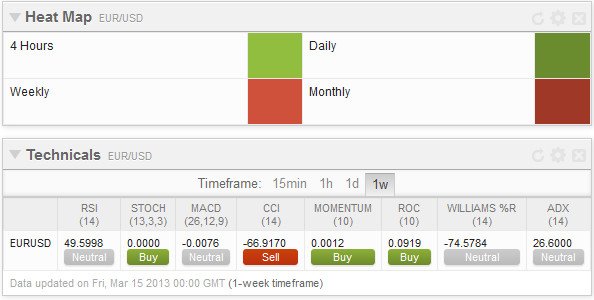 Nomura strategist Saeed Amen questioned in a recent report the current trend and pointed about the possibility of the EUR/USD to see upside ahead. Amen commented that spot has repeatedly failed to break below the 20D SMA, which suggests that there is important support on the downside. Further, he notes that bandwidth has also fallen significantly, suggesting that spot is likely to range. He writes, “Hence, spot is likely to retrace within the range higher. Also the RSI appears to have bottomed out, suggesting it has reached a short-term low. Our target is 1.3020 (above 20D SMA).”

On the other hand, Lee Hardman, FX Strategist at the Bank of Tokyo Mitsubishi UFJ noted that the euro has been undermined by the release of the much weaker than expected euro-zone PMI surveys for March. “The biggest surprise in the March readings was the drop in business confidence in Germany dampening hopes that the German economy will help lift the rest of the Eurozone out of recession." As effect on the EUR/USD, Hardman states that "the increasing likelihood of a more prolonged euro-zone recession supports our view that the ECB may ease monetary policy further later this year helping to lower the euro."

Just as reminder, early this week, UBS cut its EUR/USD forecast for the 1-month to 1.30 from 1.37 expected before and 3-month to 1.28 from 1.30 as the Italian elections and Cypriot problem "suggest the eurozone debt crisis is set to weigh on the euro again." Rabobank 3-month target is 1.2800 and the Goldman Sachs 3-month forecast has been reviewev to 1.3600 from 1.4000. However, according to the FXstreet.com Forecast poll, the EUR/USD sentiment remains neutral around 1.3000 despite Cyprus and Italy.

The Cypriot parliament has approved all 9 bills on the bank resolution required to allow the European Union's bailout. Among others, Cyprus passed solidarity, wealth fund and capital control.
Read more Previous

Cyprus authorities continue to struggle to avoid a financial meltdown in the island, and negotiations with the Troika extend over the weekend. Last Friday, the Cypriot parliament passed a bill to...
Read more Next
Start livechat