FXstreet.com (San Francisco) - During the first half of March the EUR/USD traded almost pegged to the 1.3000 level moving between 1.2960 and 1.3100. But with the beginning of the second half, the pair went down one notch to 1.2900, where the pair remains trading closely in the last days. Is it a corrective movement from recent declines?

In the fundamental panorama, it has been hardly credible to see the EUR/USD pricing above the 1.2900 level, even above the 1.3500 with the divergences in both, US and EU, economies but the Euro remains stuck at 1.2900. Since the February 1st peak at 1.3710, the pair has lost around 810 pips to current levels but market also think that the Euro could be overvalued.

FXstreet.com analyst Gus farrow commented in his Twitter account after finishing Wall Street session: "So stocks are red, the eurozone is in turmoil, but EUR/USD is holding above 2850 still... worst case priced in already?" However, as BK Asset Management analyst Kathy Lien points, "with European data disappointing and U.S. economic data surprising to the upside investors have returned to selling euros" today.

The Cypriot problem is still far to end, but also economic data is fueling bearish sentiment as PMIs data disappointing investors. "Not only has tail risk in the Eurozone returned with the ECB threatening to pull support from Cyprus if an agreement is not reached by Monday but the outlook for growth has taken a turn for the worse," continues Lien. "Compounding the euro's problems."

Today's session, the EUR/USD recovers early losses from 1.2880 to trade above the 1.2900 level at 1.2940, but the bullish movement wasn't strong enough, so the pair returned to trade around the 1.2900, where the pair remains. "EUR/USD is still managing to hold its nose above the previous support level at 1.2870 but the overall picture is looking increasingly bearish and a test of 1.2660 looks likely in coming sessions," states FXWW's analyst Sean Lee. "I’d expect to see more EUR selling today ahead of a weekend which will be full of headlines." 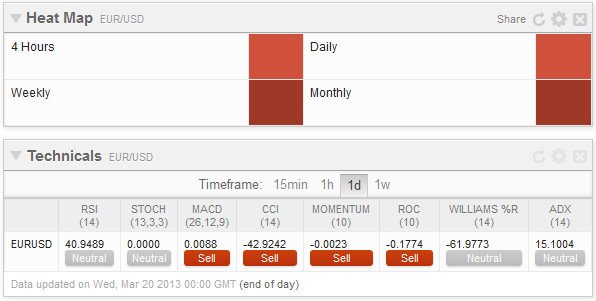 Early this week, UBS cut its EUR/USD forecast for the 1-month to 1.30 from 1.37 expected before and 3-month to 1.28 from 1.30 as the Italian elections and Cypriot problem "suggest the eurozone debt crisis is set to weigh on the euro again."

The Bank of Tokyo Mitsubishi UFJ Team agrees with UBS and they believe the EUR/USD looks bearish ahead. “The hard-line stance from the ECB sets a clear deadline for Cyprus to agree to a plan. The failure to reach an agreement poses downside risks for the euro as the withdrawal of ECB support for the Cypriot banks would make them insolvent and open door to a disorderly EMU exit." The bank expects the EUR/USD to move in range between 1.2750 and 1.3150.

Moving forward to tomorrow’s docket, a measure of the Business Climate in France will precede the more relevant German IFO, with market consensus expecting the series to be a tad better in all of its components. No relevant news in The United States neither Canada will leave the market to trade on Cyprus, earnings or central banks headlines.

As Sebastien Galy, currency strategist at Societe Generale, notes, "the Eurozone is insisting on the 100K protection which consequently leaves the offshore depositors to take the risk."
Read more Previous

EUR/JPY is last at 122.53, off daily lows at 122.02, and -1.62% lower for the week. The cross managed to close the gap down it started the week with, but has been unable to move any higher, printing weekly highs on Wednesday at 124.52, same quote it closed past Friday with. New BoJ's chief Kuroda held a press conference in late Tokyo hours, early London, insisting in his “whatever it takes” version to end deflation.
Read more Next
Start livechat