Forex: Bulls defend positions and leave the EUR/USD above the 1.2930

FXstreet.com (San Francisco) - The EUR/USD traded higher on Wednesday and recovered some ground from Tuesday's lows at 1.2840 to test the 1.2975 level, MA 200 hours, but the movement wasn't strong enough and the pair retraced to close just above the 1.2930 price.

Investors digested the Cyprus rejection of the EU bailout and the worst than expected European consumer confidence. As Kathy Lien, BK Asset Management's analyst, says, The country's fiasco will continue to affect EUR/USD flows," but the focus on Thursday will "shift to economic data and the underlying fundamentals of the region's economy."

When the pair was at 1.2975, Ben Bernanke and the Fed came into action with their improvement in its unemployment forecast but the cut in the GDP expectations. Overall, market assumed that the Fed will keep stimulus until 2015 at least. This last, fueled the USD and USD/JPY rocketed to trade above 96.00 level and the EUR/USD fell to the current levels.

Chris tevere, analyst at Forex.com, points that "Interestingly in his Q & A, Bernanke stated the FOMC may adjust the “flow rate” of QE purchases… but won’t adjust this “flow rate” every meeting or frequently, but rather when they see the economy has improved in a meaningful way." That said, continues Tevere, "he failed to indicate what he believed was a ‘meaningful’ improvement. He further added that there is a “considerable interval” between the end of asset purchases and interest rate hikes."

Back to currencies, Scotiabank believes that the Euro perspective remains bearish. “The focus remains on Cyprus, the precedent its bailout potentially sets and the impact of weak political system in times of crisis. The parliamentary vote for the bank levy bail‐in failed to produce even one favourable vote, complicating the outlook for Cyprus even as markets are relieved that guaranteed depositors remain protected”, pointed Camilla Sutton, Strategist at Scotiabank. 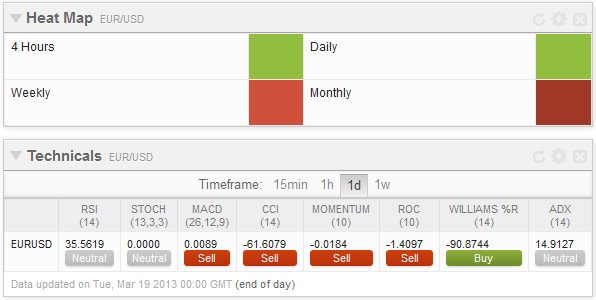 The day after the Fed

As noted before, the focus on Thursday will shift into economic data and regionals PMI. "Economists expect service and manufacturing activity in the Eurozone to improve, leading to a higher Eurozone PMI composite index," comments Lien. "If the data surprises to the upside, reassuring investors that there are still areas of growth in the Eurozone, the currency pair could extend its gains."

PMI data in China, Germany, the Eurozone and the US will catch the market attention. But also UK retail sales and US leading indicators, housing data and the Philly Fed Manufacturing index.

The New Zealand Dollar is flying higher across the board after upbeat GDP numbers in the country. The NZ GDO in the forth quarter (YoY) came in above expectations at 3.0% vs 2.3% expected and prior read of 2.0% in Q3. Meanwhile, the QoQ figure in the Oct-Dec period stood at 1.5% vs expectations of +0.9% and a previous read of +0.2%. NZD/USD has penetrated an area of heavy supply at 0.8268/78 before retracing towards 0.8255/60, where bids are coming back.
Read more Previous

Following the major recovery off 1.2120 year low, the AUD/NZD found temporary top ahead of 1.27 last week, from which the pair established a 3/4 day consolidation with a resilient base at 1.2560.
Read more Next
Start livechat