Forex: EUR/USD retraces all Monday gains from gap and trades at fresh 2013 lows

FXstreet.com (San Francisco) - The Euro traded lower on Tuesday following the developments in Cyprus. Into a sea of rumors, the EUR/USD was hurt by the wires as sources was spreading resignation talks or bailout approvals. Finally, the Cypriot parliament rejected the bank deposit levy and blocked the €10Bn bailout with a great majority.

At this moments, market talks are saying that the finance minister is heading to Russia to discuss an existing 2.5 billion euros loan with Moscow. Cyprus government has said that they have plan B and even plan C. However, the ECB has affirmed that the bank will continue providing liquidity to Cyprus as needed within the existing rules. 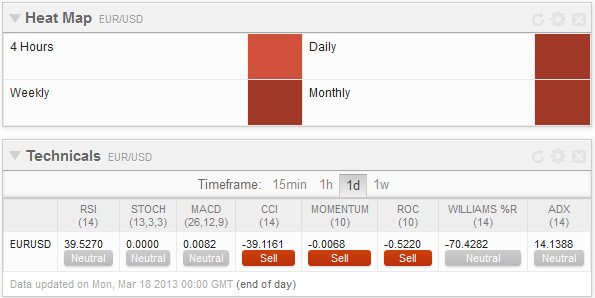 FXWW analyst Sean Lee comments in a recent report that the chances of getting a gap closure back to 1.3050 are looking increasingly unlikely. "EUR/USD broke below important technical support at 1.2870, 50% retracement, daily lows, and 200-day MA. Despite the fact that the market will close back above there, I still see more danger to the downside given the switch in asset flows."

"The next downside technical target is a big support level (weekly lows and 61.8%) at 1.2680. The chances of getting a gap closure back to 1.3050 are looking increasingly unlikely," states Lee.

The pessimism surrounding the euro remains intact, as the situation in Cyprus is far from solved. On Monday, the UBS analyst team cut its EUR/USD forecast from 1.3700 to 1.300 in the 1-month and from 1.3000 to the 1.2800 in the 3-month target. The UBS analyst team believes that Italian elections and the Cyprus against deposit-holders "suggest the Eurozone debt crisis is set to weigh on the euro again."

Mike Jones, FX strategist at BNZ, agrees with the UBS team as he says that the new established uncertainty and risk averse mood will keep the USD well supported. "EUR/USD should struggle to sustain bounces towards 1.2910, with a break below 1.2800 now the bigger risk. Key event risk for the USD will come from tomorrow morning’s FOMC minutes. These seem unlikely to surprise, but a modest downgrade of the FOMC’s US economic view could provide pause in the USD uptrend."

In addition to the Cyprus drama, Euro docket on Wednesday seems interesting a priori, as Germany will publish its Producer Prices ahead of the EMU’s Current Account. A 10-year auction in Germany will follow, preceding the preliminary figures of the EMU’s Consumer Confidence for the month of March.

Besides eurozone's news, the Fed will come into action on Wednesday and investors are expecting Bernanke to keep the status quo. As Jane Foley, Strategist at Rabobank, points, the greenback would likely found some support due to the recent improvement in the US economy.

There are new statements coming through the wires relating to the fluid situation in Cyprus, which recently failed to ratify the infamous bank deposit tax.
Read more Previous

Forex Flash: Next headlines on Cyprus to provide a sense of timelines - TDS

After the Cypriot Parliament voted no to a bank levy, in view of Richard Kelly, Head of European Rates and FX Research at TD Securities, "their first alternative is to try to negotiate Russian support on Wednesday to see if they can get a better offer or negotiating power with the Eurogroup, however, Cyprus has little leverage with either."
Read more Next
Start livechat