Forex: EUR/USD attempts to leave the 1.3000 mark behind

After trading glued to the 1.3000 number during almost the whole Monday, the EUR/USD has accelerated in the late American session and currently the pair is testing the 1.3050 level, pretending to leave the 1.3000 mark behind it.

In the day, the USD was trading somehow bearish against its major competitors except the Pound with the GBP/USD felling to lowest price since June 2010 at 1.4865. Regarding the EUR/USD, the pair inched higher to 1.3055 just ahead a 200 hours MA at 1.3060.

According to the FXstreet.com trend index, the EUR/USD is experiencing a slightly bullish trend with the CCI, MACD and Momentum indicators pointing higher while the RSI is neutral and the Stochastic bearish in the 1-hour chart. But in the wider 1-day time frame, the scenarios is quite different with the MACD, CCI and Momentum on bearish mode and the Stochastic pointing north. 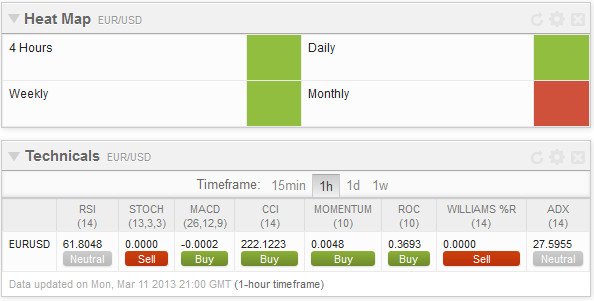 Despite the recovery, the Euro remains vulnerable

Technically speaking, even though short-term indicators show the outlook has improved for the EUR/USD, longer-term bias remains bearish and despite the euro has advanced to 1.3050, the pair continues oscillating around 1.3000 showing lack of determination.

"Markets still seem to be looking for some stronger directional signals in a number of majors—and the EUR is perhaps providing the most mixed messages", says the TD Securities team. "After Draghi downplayed the discussion on rate cuts last week, it seemed like the EUR could be staging a turn around. But then we saw the very strong US employment report that muddied the waters somewhat for EUR/USD. We have turned more neutral on the EUR for the moment, but this week's theme may come more from USD sentiment".

In this line, Camilla Sutton, Chief Currency Strategist at Scotiabank, commented, "from the ECB's point of view the economic recovery in the later part of 2013 is based on an increase in world demand (exports), loose monetary policy and less fragmentation. We would suggest that this recovery strategy requires a weak EUR." Accordingly, Scotiabank expects "that any rise in EUR back towards its February level of 1.35 will generate angst at the ECB. We hold a year-end EUR forecast of 1.27."

On Tuesday, the BoJ minutes will provide some clues on the Kuroda government. Investors must pay attention to the German CPI and the UK industrial production and NIESR GDP estimate.

Following BOJ governor candidate Mr. Kuroda remarks on the need for more monetary easing during his intervention at the Japan's upper house yesterday, according to Nomura strategist Yujiro Goto, "in terms of the timing of easing, he said he wants to discuss easing soon, suggesting an easing at the first meeting (April 3-4) is possible" Yujiro says.
Read more Previous