It's alive! The Euro is alive and finally it has waken with the EUR/USD jumping above the 1.3100. Mario Draghi fueled the pair as he said that a gradual recovery in the Eurozone will start in the second half of 2013. The EUR/USD advanced in the American session moving off recent sub-1.3000 levels to reach fresh March highs at 1.3120. Currently the pair is trading in consolidation mode between 1.3100 and 1.3110.

Later on the day, the Federal Reserve published the stress test results showing that just one out of 18 largest banks failed the Fed's stress test results. Ally Financial was the exception as the only bank who misses targets. According to the Fed, 17 largest banks has sufficient capital to pass a severe downturn. The Fed's "Adverse" Scenario contemplates the DJIA plunging to 7,221.7 in Q4 2013 and then soaring to 15,294.9 in Q4 2015.

All of this have happened just ahead the US employment report and the so-called NonFarm payrolls. So what's ahead for the EUR/USD after the ECB? Tomorrow's US jobs report should provide some direction for FX markets heading into next week.

Earlier in the day, comments from Draghi alongside better-than-expected US jobless claims helped to boost the EUR/USD which rose above 1.3100 for first time in a week. The ECB President Mario Draghi said that even though the decision was not unanimous, the ECB never precommits. Draghi also sounded optimistic by saying the economy will gradually recover and played down the Italian elections effects on the eurozone.

The Jobs Friday ahead

Friday’s calendar in the euro area would only offer the German Industrial Production as its most significant release, ahead of the Non-farm Payrolls and the jobless rate in the US economy, expected to increase a tad by160K in February, and to remain at 7.9% in the same period, respectively.

"As the week has progressed the here been some improvement in market sentiment, helping to support gains in U.S. European equities and many foreign currencies", says Nick Bennenbroek, Head of Currency Strategy at Wells Fargo Bank. "Should the U.S. jobs report show a solid gain tomorrow the commodity and emerging currencies could rise further, though we are more cautious on prospects for the euro, yen and pound".

With the EUR/USD having the biggest rally since January and reaching the highest level since February 28th at 1.3120, Friday could be a session with high volatility fueled by risk appetite. If NFP beats estimates or even it's in line of expectations, the overal sentiment regarding the warming up in the US economic engines could spur gains in stocks and risky currencies.

But in the other hand, Christopher Vecchio, Currency Analyst at DailyFX says that the EUR/USD rally could be short-lived, especially if tomorrows US Nonfarm Payrolls report for February lives up to the hype (+170K expected). "The growing divergence between the Euro-zone and US economies will be too apparent to keep the EURUSD bid on President Draghi’s 'hopes' for an economic recovery, despite no new policies on either the fiscal or monetary side that would indicate otherwise", he comments. 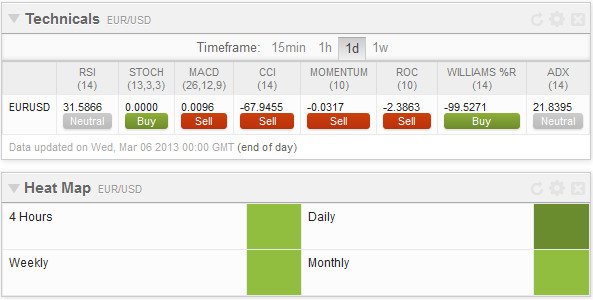 Stress tests results in the US, conducted by the Fed an an exercise required under the 2010 Dodd-Frank financial overhaul, have shown that 17 out of 18 banks stress tested meet the minimum requirement of tier 1 capital above the 5% threshold, noting that banks could weather sharp downturn with adequate capital.
Read more Previous

The ECB held rates despite a weakening GDP forecasting and well-below-target inflation. According to Standard Chartered, "a rate cut – discussed on 7 March – is still possible, in our view, though the ECB’s tolerance for pain is high", adding that "we have downgraded our growth forecast and now expect a contraction of 0.5% in 2013."
Read more Next
Start livechat