Today’s trading session became quite volatile despite the banking Independence Day holiday in the US. North Korea grabbed geopolitical headlines by the launch of a long-range missile which led to the strengthening of safe haven assets like gold and the Japanese yen. However, the effect was soon taken in stride by investors who have gotten used to the high level of tension connected with military tests in North Korea.

Among the central news of the day was the statement of the Reserve Bank of Australia, according to which, the strong national currency remained a burden that restrains economic expansion. On the other hand, forecasts on the labour market of the country are still optimistic despite slow growth in wages. Retail sales in Australia demonstrated a growth by 0.6% in May against the forecasted increase by 0.2%.

The euro depreciated against the US dollar due to rising yields in the US. Inventors mostly ignored news on the reduction of the number of employed in Spain by 98.3 thousand in June to 3.36 million people which is the lowest figure in 8 years. The producer price index in the Eurozone declined by 0.4% in May which is twice worse than predicted.

Oil traders paused with new purchases after information was published regarding continued growth of crude oil production in Libya and Nigeria. Additional pressure on oil quotes came from the stronger dollar and desire of traders to fix positions after an eight-day winning streak.

The common currency continues to show a moderate decline where it was able to break through the 1.1350 level. This may become a stimulus for the bears to pull the price downwards to 1.1300 and 1.1200. In the case of growth resumption, the quotes may return to the resistance at 1.1450 and then move up to 1.1500-1.1520. Because of thin trading due to the day off in America, we do not exclude the rise in volatility. 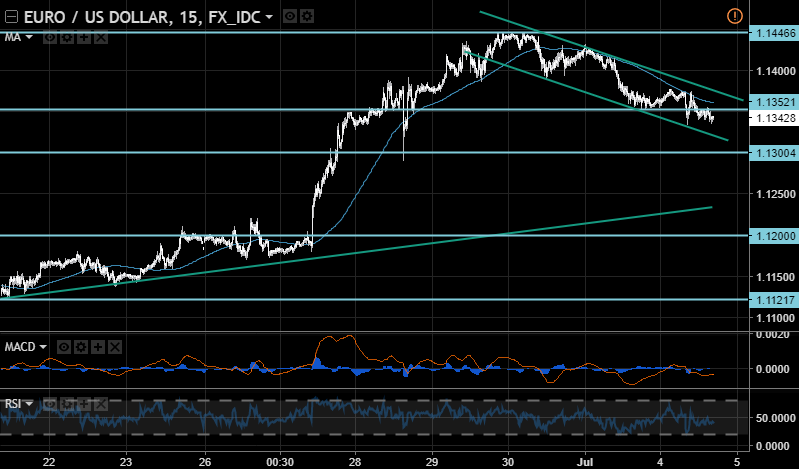 Traders are in no hurry to build up positions ahead of tomorrow’s publication of the Fed’s meeting minutes. A stronger dollar keeps pushing on the British pound that today was also hit by poor statistics on the British construction PMI which in June declined to 54.8, 0.2 worse than forecasted and 1.2 less compared to May. In order to change the trend to negative with the first targets at 1.2635 and 1.2590, the price needs to break through the inclined support line and the important level of 1.2890. Growth potential is likely to be restrained by resistance at 1.3030. 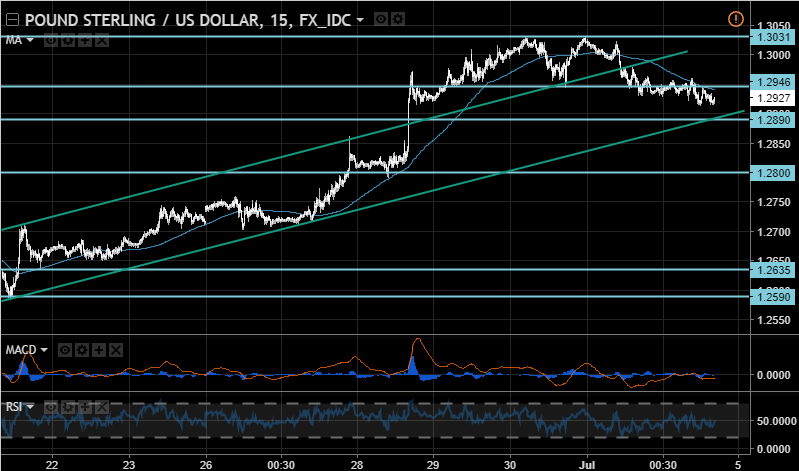 Increased interest in defensive assets after the new missile test in North Korea provoked the fall of USD/JPY. We recall that the Japanese yen traditionally gets more popular among investors during periods of uncertainty. Currently, the quotes are consolidating near the level of 113.10 and strong demand for the US dollar amid rising yields in the US may lead to further increase with potential targets at 114.00 and 114.70. A downward correction is possible within the limits of the rising channel. 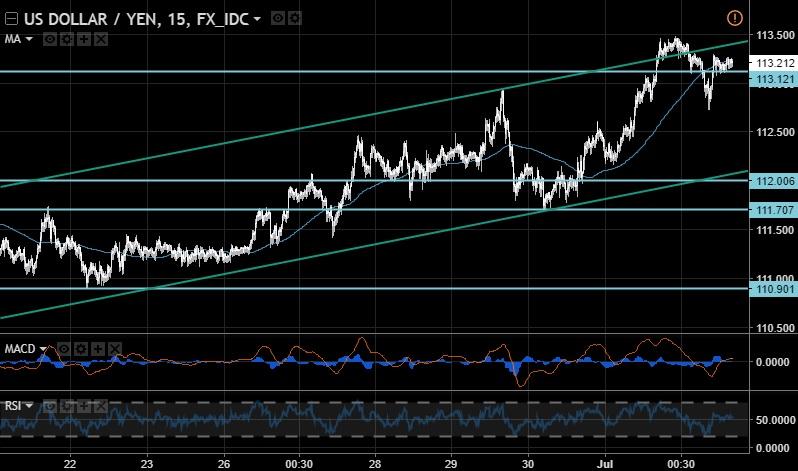 The slump of the Australian dollar was due to rhetoric by the RBA. The possibility of a rate hike in Australia is considered to be extremely low during this year and the central bank also doesn’t like that the strong aussie negatively affects economic growth. In the case of overcoming the support at 0.7600, next targets may be at 0.7565 and 0.7520.  After a sharp decline, we may see profit taking and a rebound up to the inclined resistance line. 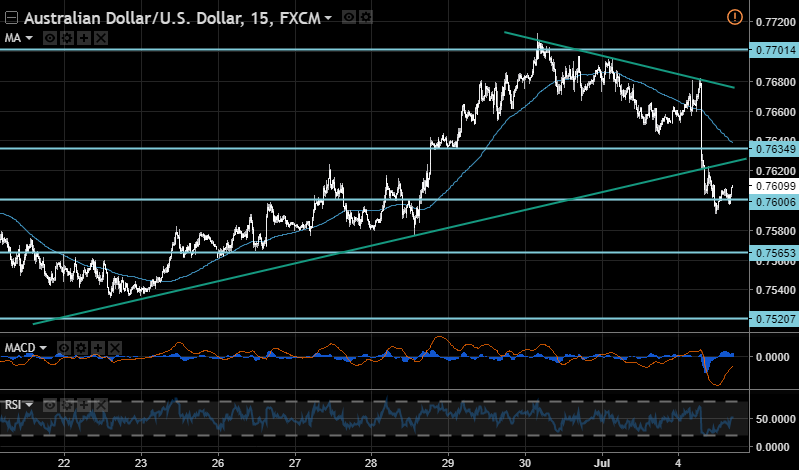 Quotes for the precious metal regained some of the previously lost positions on the background of stronger demand for defensive assets, but the rebound turned out to be short-lived and the stronger dollar together with increasing bond yields continued to pull the prices down. After overcoming the support at 1220 we may see the price approach to 1215 and 1200. An upside is limited by the upper limit of the rising channel. 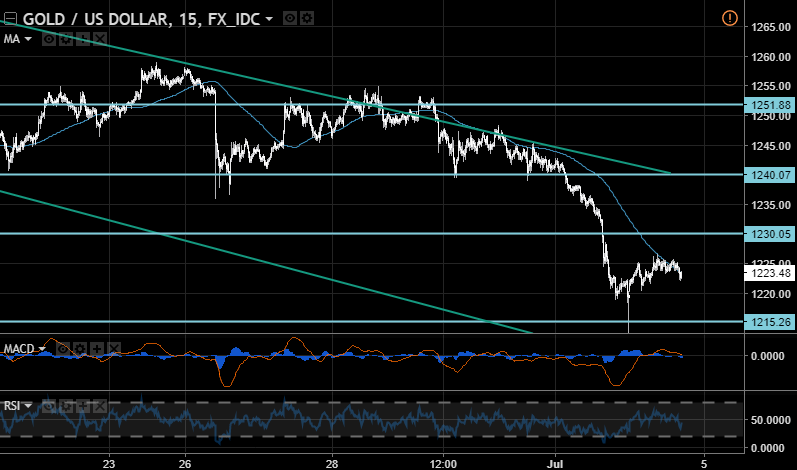 After some consolidation of the price below the strong resistance at 47.00, WTI oil showed a strong increase. Bulls resumed buying after the American crude oil benchmark came close to the SMA 100 on the 15-minute chart. The ongoing impulse may continue up to 47.75 and 48.35. After a strong upward correction, we do not rule out the resumption of a descending trend, but currently, there are no hints about it. The RSI on the 15-minute chart is near the overbought zone that is indicating an exhaustion of the current impulse. 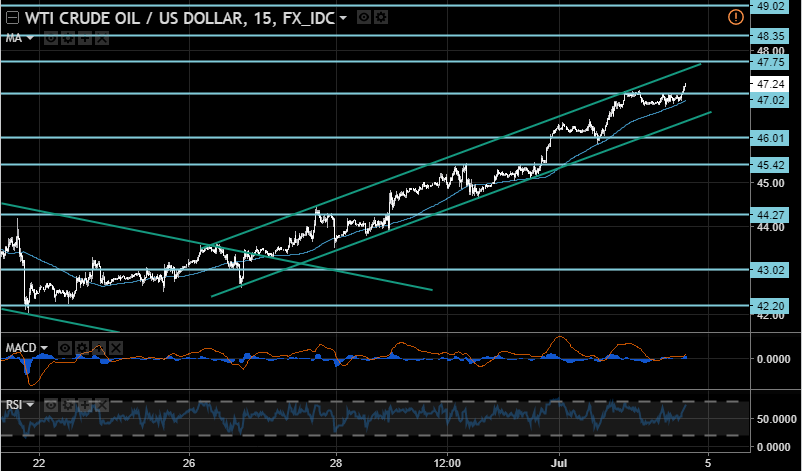