MARKET PREPARES TO CELEBRATE INDEPENDENCE DAY IN THE USA

Strengthening of the US dollar ahead of the celebration of the Independence day tomorrow weighted on other world currencies. Fixing positions before the bank holiday is a usual practice on the foreign exchange markets. The final manufacturing PMI of the Eurozone in June increased to 57.4 against forecasted 57.3. This data could not change the negative dynamics of the common currency against the US dollar. The unemployment rate in the Eurozone in May remained at 9.3%. We do not rule out the possibility of growth resuming due to optimism concerning the possibility of cuts to the asset purchasing program in the Eurozone that may start in September or October of this year.

The British pound has been under pressure thanks to the manufacturing PMI which fell in June by 2.0 to 54.3. This indicator still shows expansion in the sector but its pace is slowing down. Traders are not finding new incentives to push the Sterling above the support near 1.3050. Investors fear the possibility of weak results from Theresa May during the Brexit talks with the EU.

Dynamics of the New Zealand dollar will depend on the news on the business confidence index to be published at 22:00 GMT. We do not predict changes in the monetary policy settings in Australia after the RBA meeting tomorrow. The statement of Australian central bank will be released at 04:30 GMT tomorrow morning and hints about the possible tightening of its policy will support the aussie, but such kind of impulse will be short lived due to low commodity prices.

Oil quotes were supported by the first reduction in the number of active drilling rigs in the US in 24 weeks, according to Baker Hughes, but increases in American oil production is likely to continue within next months. Gold remains under pressure from the bears amid the positive trend on the stock markets and increase in yields in Europe, Japan, and Canada.

The EUR/USD price was unable to overcome the resistance at 1.1450 and continues growth up to the psychologically important level of 1.1500. As a result, quotes broke through the lower limit of the local ascending channel and in a case of further decline may hit the closest support levels at 1.1300 and 1.1230. The activity of traders will be low because of tomorrow’s banking holiday in the US. 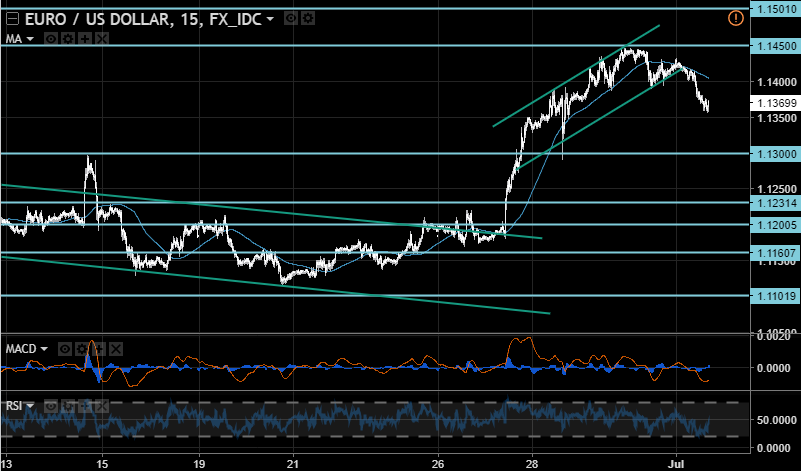 The GBP/USD price retreated after a failed attempt to reach resistance at 1.3050. Currently, the quotes are near the support at 1.2950 and its breaking will finish the formation of the “double top” pattern that traditionally points to a trend reversal. In this case, the immediate targets will be 1.2890 and 1.2800. The potential upside is likely to be restrained by the multi-month high near 1.3050. 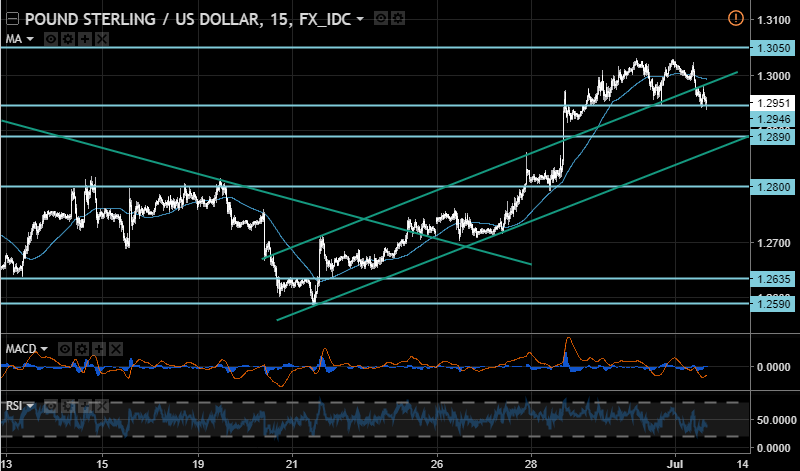 The Australian dollar corrected downwards on the background of appreciation of the US dollar and due to a technical rollback after strong growth. Traders are waiting for the RBA’s statement on monetary policy that will be published tomorrow at 04:30 GMT. In order to continue the upward movement, quotes need to overcome 0.7700. In the nearest future the first target in the case of a fall will be 0.7635, and once this is broken it will open the way to 0.7600 and 0.7565. 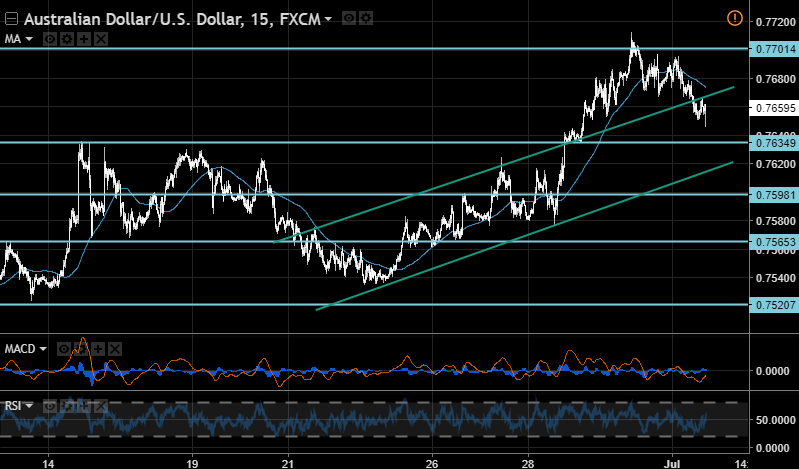 The kiwi quotes followed the Australian dollar and as a result reached the inclined support line. Breaking through it may become a signal to sell with the decline potential to 0.7220 and 0.7190. At the same time, there is a possibility of an upward rebound up to 0.7350-0.7375. A slight spike in volatility is possible after the release of data on business confidence in New Zealand at 22:00 GMT, but the main attention will be turned to news from Australia that have a significant impact on the kiwi. 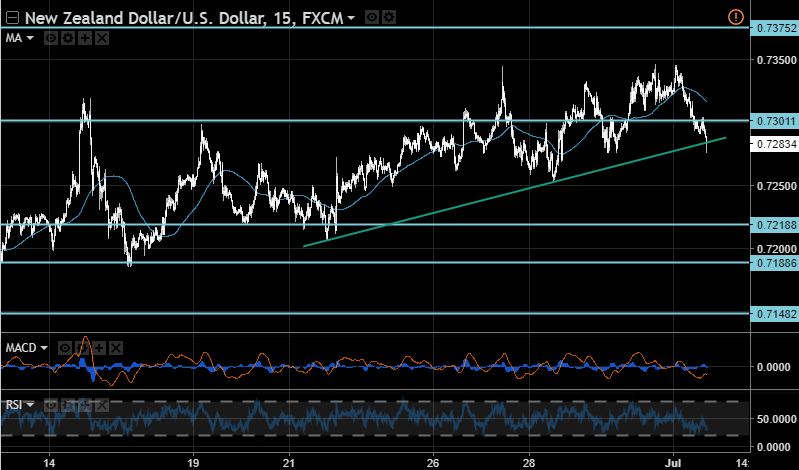 On the price chart of gold, the bears finally succeeded and broke through the strong support at 1240 which was previously tested a number of times. After surpassing this level, the drop accelerated and now the closet objectives for the bears are near 1215 and 1205. Upward correction is likely to be limited by the upper limit of the descending channel. 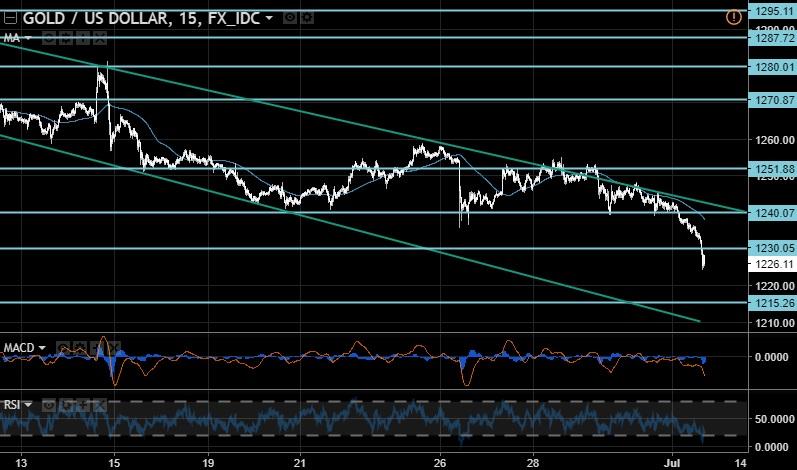 The positive trend of WTI oil resumed after some consolidation above 46.00. The next targets while moving within the upward trend will be 47.00 and 47.75. The RSI on the 15-minute chart is in the overbought territory that may be a sign of a correction within the channel soon. The winning streek for oil quotes is likely to end soon, in which case the signal to sell with potential objectives at 44.25 and 42.00 may come from breaking through the 46.00 level. 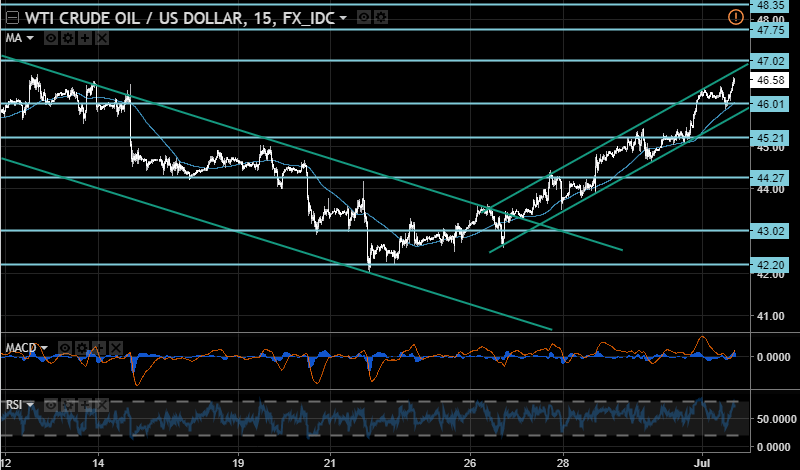