The euro price keeps consolidating in anticipation of new drivers. Less than expected non-farm payroll data out of US on Friday hasn’t decreased the chances of another interest rate hike by the Fed in December. That along with the ECB’s decision to prolong the asset purchasing programme into 2018 is exerting pressure on the common currency. The EUR/USD was mildly impacted by a weaker than expected report on German services PMI which dropped to 54.7 against the forecasted 55.2. The euro did receive support following the release of the services PMI for the Eurozone which increased by 0.1 to 55.0 and from the Sentix investor confidence index which grew to 34.0 in November, much better than the forecasted 31.2.

Investors are also reluctant to open new positions ahead of the speeches of the ECB’s Mario Draghi and the Fed’s Janet Yellen tomorrow. Analysts are however not expecting to get any new hints about future steps by the central banks.

The USD/JPY has fallen despite the negative effects from the speech by the head of the Bank of Japan. Haruhiko Kuroda confirmed the intention to keep the ultra-soft policy settings in Japan until inflation reaches the target level of 2.0%. Investors in the yen will be keeping an eye on the average cash earnings data due in Japan at 00:00 GMT.

Tomorrow the market turns its focus to the RBA’s interest rate decision due at 03:30 GMT. The central bank is not expected to change monetary policy in Australia, but we may see a rise in volatility.

The bulls keep pushing WTI quotes upwards thanks to the fall in the number of active oil drilling rigs in the US by 8 to 729 units, according to oil services company Baker Hughes. Oil prices hit their highest level since July 2015 following Saudi Arabia’s anti-corruption crackdown on the weekend and from statements on the Kingdom’s intention to maintain OPEC’s tightening of global supplies and target to reduce oil inventories.

The EUR/USD price keeps consolidating under strong resistance at 1.1620. Fixing under this level may be the basis for further price drops to the 1.1500-1.1550 range. At the same time, we do not eliminate the chance of a current trend reversal to positive and in case of gaining a foothold above 1.1620, we may see further growth to 1.1730. 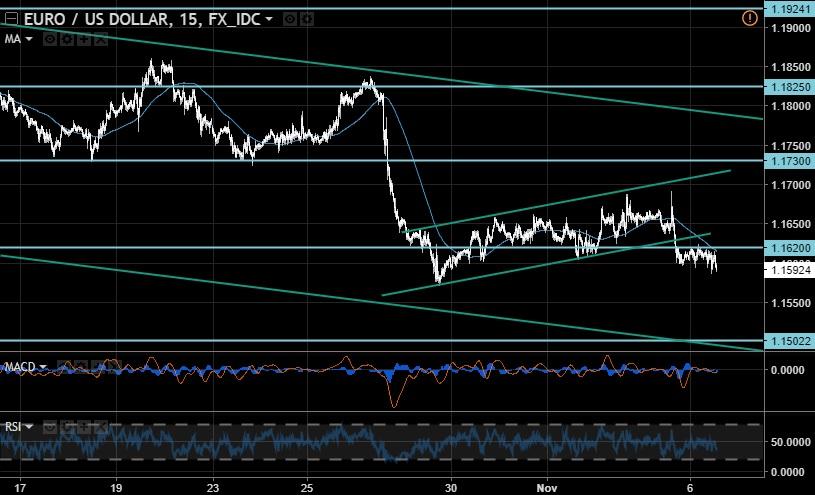 The USD/JPY retreated downwards after testing the resistance at 114.70. In case of breaking through the support at 114.00 and fixing below it, the next targets are likely to be 113.00 and 111.70. The RSI on the 15-minute chart just left the oversold zone, which points to the increased probability of a rising movement soon. 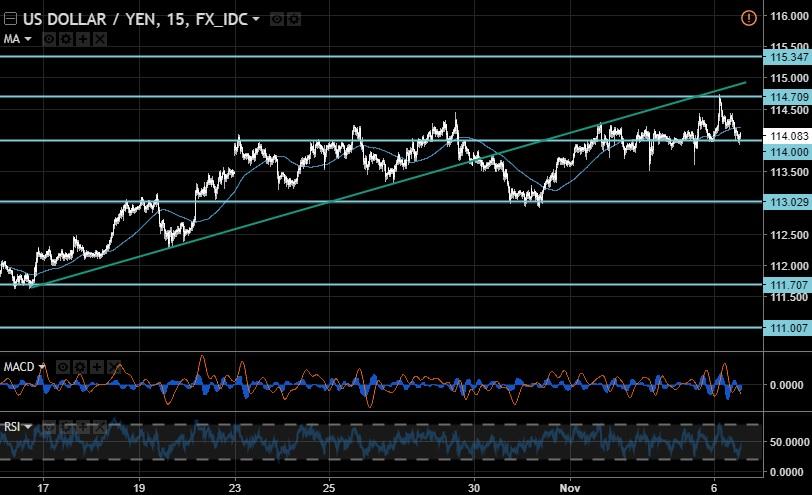 The USD/WTI is moving along the upper limit of the rising channel. The immediate goal in case of maintaining the current positive impulse will be at 57.00. In case of profit taking the quotes may return to the SMA100 on the 15-minute chart or even to the support at 55.00. 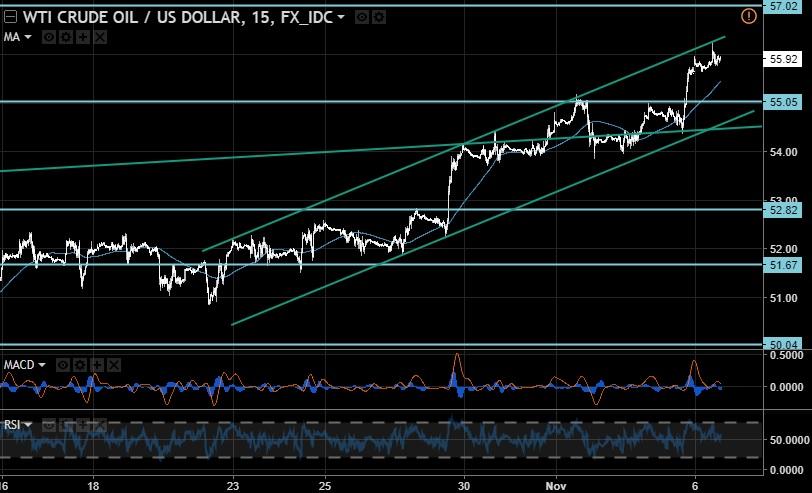