US CPI is the major on the economic calendar this week

During the upcoming trading week, the release of United States Consumer Price Inflation data is the major event on the economic docket that traders and investors will be watching out for. Market participants will be looking for signs of inflation in the US as the American economic outlook appears to be strengthening after recent solid jobs and manufacturing data. The release of US Retail Sales and Consumer Sentiment will also be closely observed this week.

Other highlights on the economic calendar include Chinese GDP data, US Weekly Jobs data, Australian monthly jobs figures, and eurozone retail sales. The Reserve Bank of New Zealand's interest rate decision and policy statement is also expected to be a market mover this week.

The Retail Sales released by Eurostat is a measure of changes in sales of the Eurozone retail sector. It shows the performance of the retail sector in the short term. Percent changes reflect the rate of changes of such sales. The changes are widely followed as an indicator of consumer spending. Usually, positive economic growth is bullish for the EURUSD, while a low reading is seen as negative, or bearish, for the EURUSD.

The Consumer Price Index is released by the US Bureau of Labor Statistics and evaluates fluctuations in the cost of living by measuring the changes in prices consumers pay for a set of items. CPI is used as the headline figure for inflation, which means that the dollar depreciates in value and each dollar is capable of buying fewer goods and services. In terms of inflation measurement, CPI is the most obvious way to quantify fluctuations in purchasing power 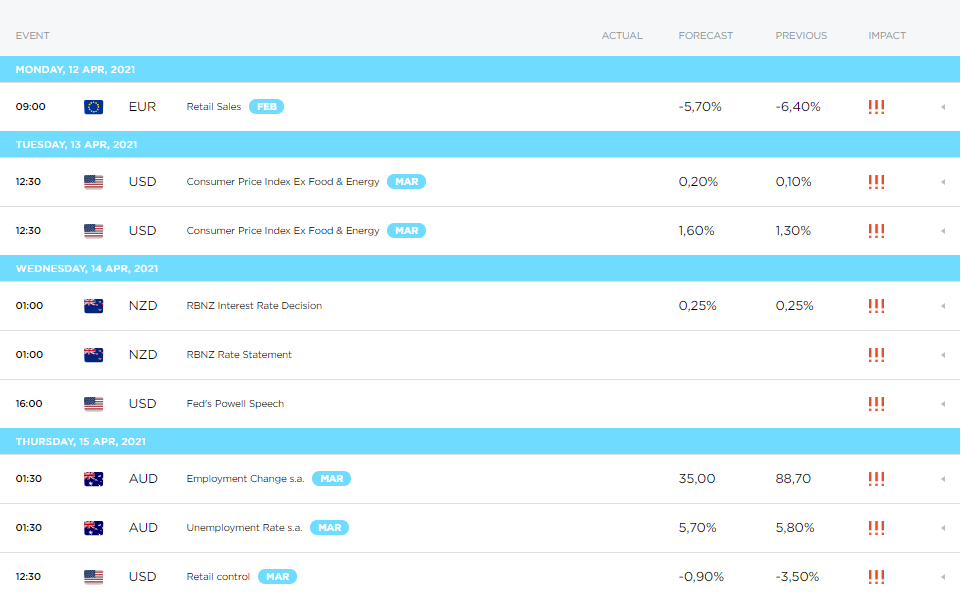 RBNZ Interest Rate Decision is announced by the Reserve Bank of New Zealand and is closely followed by the RBNZ policy statement. The RBNZ is not expected to cut interest or raise interest during the April policy meeting as the domestic economy still remains uncertain. If the RBNZ is hawkish about the inflationary outlook of the economy it is positive for the New Zealand dollar. If the RBNZ is dovish towards the inflationary outlook it is generally bearish for the New Zealand dollar.

US Initial Jobless Claims is released by the US Department of Labor on a weekly basis and is a measure of the number of jobless claims filed by individuals seeking to receive state jobless benefits. This figure measures the strength in the United States labor market and is closely followed by both traders and investors.

The Michigan Consumer Sentiment Index released by the University of Michigan is a survey of personal consumer confidence in economic activity. It shows a picture of whether or not consumers are willing to spend money. Generally speaking, a high reading anticipates positive for the US dollar currency, while a low reading is seen as negative for the US dollar currency.