During the upcoming trading week, traders and investors are set to remain focused on the results of the US Presidential election, and a key interest rate decision from the Reserve Bank of New Zealand. Traders will likely react to the confirmed Joe Biden victory, and if Donald Trump contests the US Presidential election in the US Supreme Court. The Reserve Bank of New Zealand is also widely tipped to keep interest rates unchanged at record low levels this week.

Other highlights on the economic calendar this week include an EU Finance Minister Meeting, and important Consumer Price Inflation data from the United States economy. United Kingdom economy data is also heavily in focus this week, with UK Growth, Wage, and Employment figures.

The Bank of England Governor, Andrew Bailey, is set to deliver a scheduled speech to market participants, at a time when the central bank is considering negative interest rates and further monetary stimulus. Governor Bailey took office on March 16th, 2020, at the end of former Bank of England Governor, Mark Carney's term. Bailey was serving as the Chief Executive of the Financial Conduct Authority before being designated.

The UK Claimant Change is released by the National Statistics and measures the change in the number of unemployed people in the United Kingdom during the reported period. This figure is not an unemployment indicator it simply measures the number of people claiming benefits. Most analysts are expecting a high number due to the effects the coronavirus lockdown is having on the UK economy. 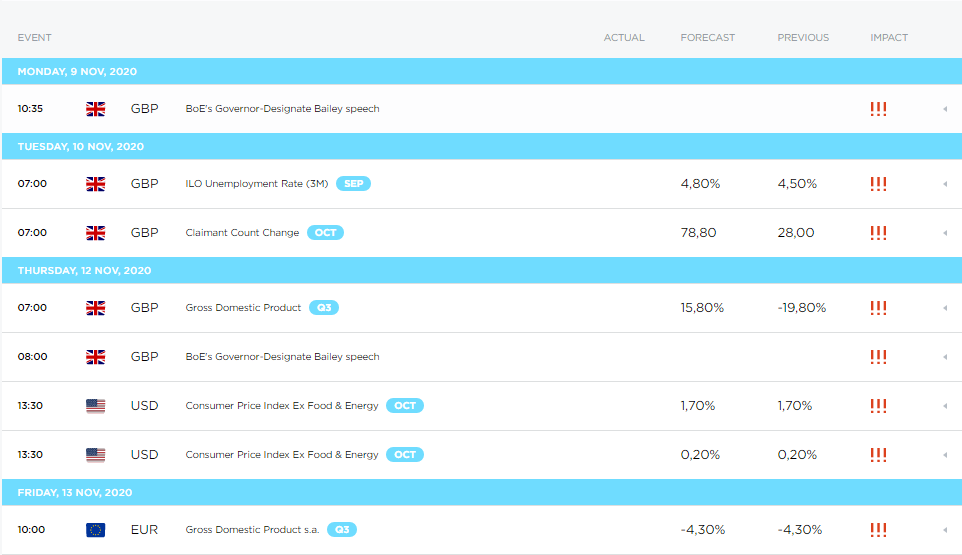 The Reserve Bank of New Zealand rate recision is the market interest rate on overnight funds, with the RBNZ standing as the central monetary authority for the New Zealand economy. The Reserve Bank of New Zealand is widely expected to keep interest rates on hold at this meeting, following rate cuts earlier this year. RBNZ policymakers are also tipped to strike an overall dovish tone towards the domestic economy and monetary policy.

US Initial Jobless Claims is released by the US Department of Labor on a weekly basis and is a measure of the number of jobless claims filed by individuals seeking to receive state jobless benefits. This figure measures the strength in the United States labor market and is closely followed by both traders and investors.

Eurogroup meetings are attended by the Eurogroup President and the Finance Minister of each Member State of the euro area. The Commissioner for economic and monetary affairs and the President of the European Central Bank also attend these meetings. The Meeting is likely to be heavily focused on the latest Brexit negotiations, and the ongoing COVID-19 outbreak in Europe.