During the upcoming trading week, traders and investors will focus on key rate decisions from the FOMC and European Central Bank and the result of the UK General Election. Market consensus is currently split as to whether the Federal Open Market Committee will cut interest rates in December. The ECB is unlikely to cut interest this month, however, the focus will be on the new ECB President, Christine Lagarde. Traders and investors will be listening closely to ECB President Lagarde and the ECB Governing currently feel about the EU economy.

The United Kingdom will also hold a General Election this week, with traders expecting extreme volatility in the British pound. Other highlights on the economic docket include Chinese CPI, German ZEW data, US Retail Sales and a key rate decision from the Swiss central bank.

Japanese Gross Domestic Product is released by the Cabinet Office and measures the overall production and consumption of goods and services in Japan for a certain period of time. It is one of the primary indicators of the well-being of the Japanese economy and closely watched by market participants and the Bank of Japan. A worse-than-expected GBP number can negatively impact the USDJPY pair.

The Center for European Economic Research releases the ZEW survey for financial experts across Europe on a monthly basis in order to create a mid-term forecast in regards to Germany's economic situation. The survey's responses are restricted to positive, negative or unchanged for all components. Due to the simplicity in its structure, the survey is quick and efficient in terms of turnaround time. Experts are also asked for a qualitative assessment of the inflation's direction, interest rates, exchange rates and the general stock market within the following six months. 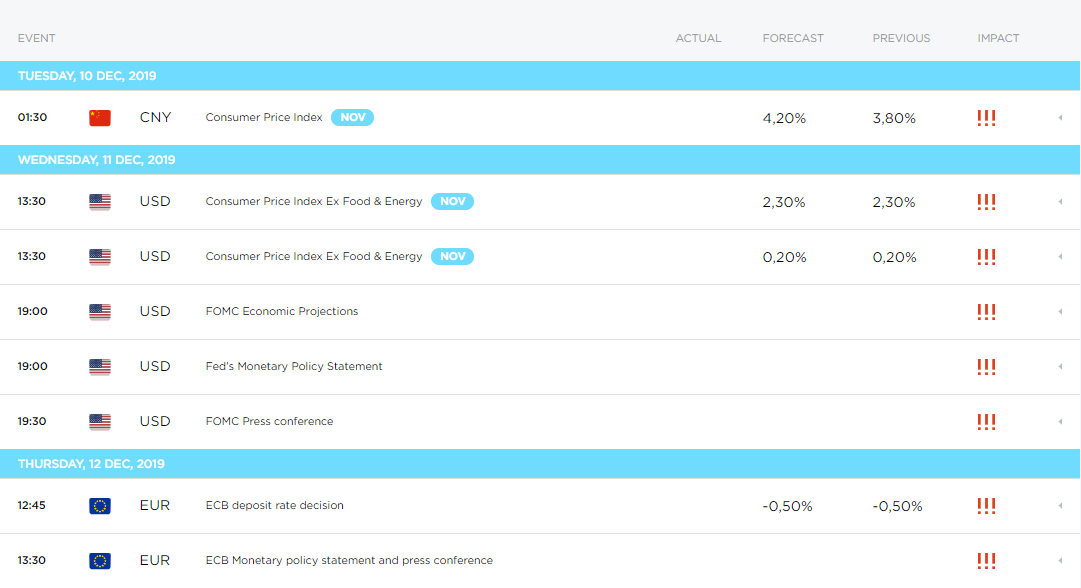 The Federal Open Market Committee meets eight times per year to decide on United States monetary policy and where to set the nation's interest rate. Rate changes impact interest rates for US consumer loans, bonds, mortgages and the US dollar exchange rate. The decision of the FOMC policy statement is usually very important, maybe more important than the actual interest rate move made by the central bank, due to it being highly anticipated by market participants. The policy statement includes hints for the future and contains the central bank’s collective outlook on the economy.

The European Central Bank's interest rate decision is made by the ECB Governing Council on whether to either increase, decrease or maintain interest rates. The key mechanism behind the monetary policy is the control of interest rates.

United States retail Sales is released by the US Census Bureau and measures the total receipts of American retail stores. Monthly percent changes in the headline number reflect the rate of changes in overall retail sales. Changes in the headline number are widely followed as an indicator of consumer spending. Generally speaking, a high reading is seen as positive for the US dollar, while a low reading is seen as negative for the US dollar.