US economy heavily in focus during the upcoming trading week

During the upcoming trading week traders and investors look to a key interest rate decision from the FOMC and the release of the US monthly jobs report. The United States economy also releases a slew of high-impacting macroeconomic data points during the course of the week, including Manufacturing, Consumer Confidence, Inflation, Home Sales, Unemployment and Wage Earnings data.

The Tokyo Consumer Price Index is released by the Japanese Statistics Bureau and is a measure of price movements. Tokyo CPI is obtained by the comparison of the retail prices of a representative shopping basket of goods and services, excluding fresh food. Traders pay attention to Tokyo CPI as the purchasing power of the Japanese yen currency could be decreased by rising inflation. 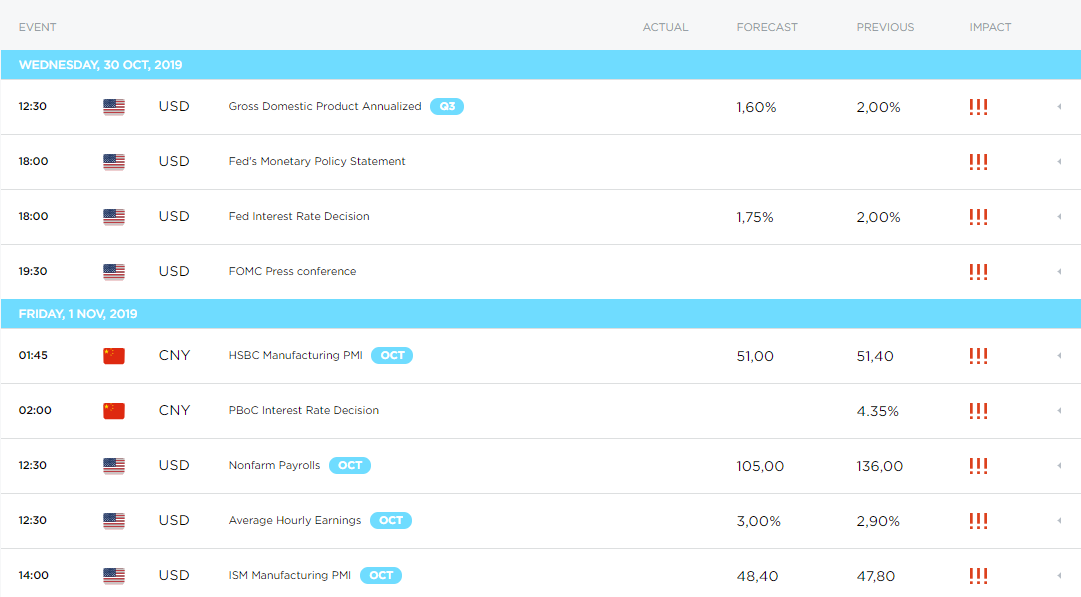 The Federal Open Market Committee meets eight times per year to decide on United States monetary policy and where to set the nations interest rate. Rate changes impact interest rates for US consumer loans, bonds, mortgages and the US dollar exchange rate. The decision of the FOMC policy statement is usually very important, maybe more important than the actual interest rate move made by the central bank, due to it being highly anticipated by market participants. The policy statement includes hints for the future and contains the central bank’s collective outlook on the economy

The US Core PCE Index report is greatly valued mainly due to its capability of forecasting inflationary pressures inside the American economy. The Federal Reserve utilizes a measure of inflation resulting from the PCE as their primary gauge of inflation. An overall increase in prices may be derived from an excess take in of these high levels of production and consumption.

The NFP job report shows the monthly change in employment in the American economy, excluding the farming sector. The Non-farm payrolls job report is the most carefully observed indicator in the employment situation inside the United States. It is considered the most inclusive calculation of job creation, which causes the Nonfarm Payrolls Job report to become highly significant to market participants, due to the great importance of labour in the United States economy.