The month of June starts with a flurry of activity as traders and investors ready themselves for a non-stop week of high-impacting macroeconomic data releases and central bank rate decisions. This week we see PMI manufacturing data releases from the Japanese, Chinese, UK, eurozone, Canadian and United States economy and interest rate decisions from the Reserve Bank of Australia and the European Central Bank. The RBA is widely expected to cut interest rates after nearly three years of keeping rates on hold, while the ECB is expected to significantly downgrade eurozone growth expectations this week.

The American economy also releases the important ISM Manufacturing report this week and the Nonfarm payroll job, with most economists expecting that the United States economy created 190,000 new jobs last month. We also see a host of eurozone data and the release of the Canadian monthly jobs report.

The United States Manufacturing PMI reports on Manufacturing activity inside the American economy and represents economic indicators derived from monthly surveys of private sector companies. PMI data provides advance insight into the private sector economy by tracking variables such as output, new orders, employment and prices across these key sectors.

The Reserve Bank of Australia Rate Decision is the market interest rate on overnight funds, with the RBA standing as the central monetary authority for the Australian economy. The Reserve Bank of Australia is widely expected to cut the nations interest rate from 1.50 percent to 1.25 percent at this meeting and strike an overall dovish tone towards the economy and monetary policy. 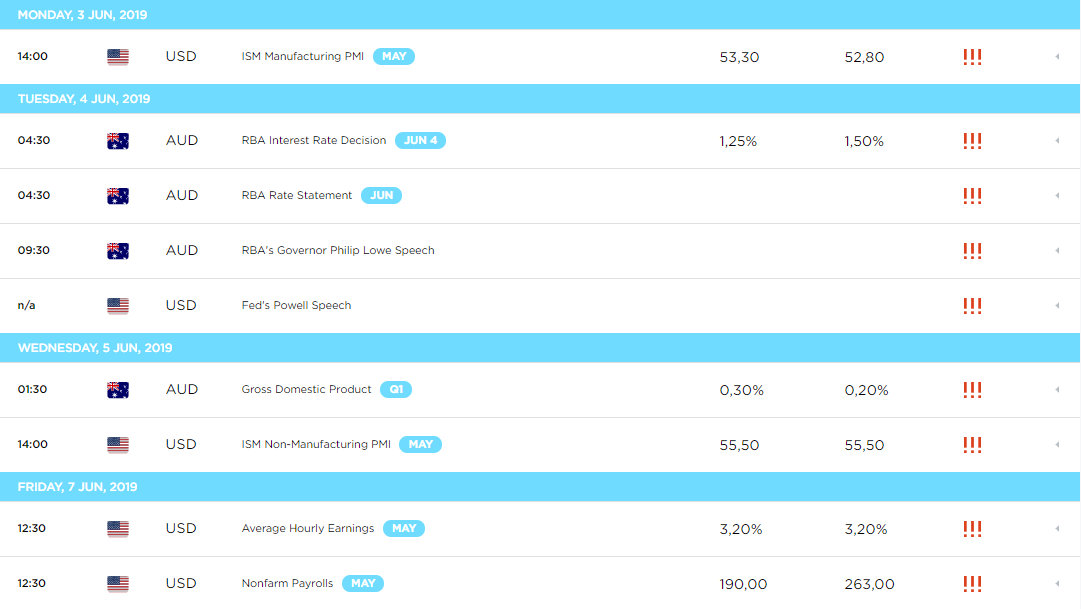 After the ECB Interest Rate Decision is announced, the European Central Bank holds a lengthy monthly press conference with ECB President Mario Draghi delivering a prepared statement. The main points of the conference are inflation and an economic overview and examination of the causes behind the Governing Council’s decision. During the conference, ECB President Mario Draghi answers questions and also gives important clues related to future monetary policy.

The NFP job report shows the monthly change in employment in the American economy, excluding the farming sector. The Non-farm payrolls job report is the most carefully observed indicator in the employment situation inside the United States. It is considered the most inclusive calculation of job creation, which causes the Nonfarm Payrolls Job report to become highly significant to market participants, due to the great importance of labour in the United States economy.