During the upcoming trading week central banks are heavily in focus as we see the US Federal Reserve, Bank of England and Swiss Nation Bank deciding on where to set interest rates. All central banks are expected to keep rates on hold, with the FOMC rate decision and monetary policy statement likely to be the main market event this week.  The recent set of weaker than expected economic data releases from the United States economy leave room for the Federal Reserve to turn more dovish, as they adopt a more cautious stance.

Aside from interest rate decisions, the latest news and events surrounding Brexit continue to unfold while the economic calendar remains busy with the release of the Reserve Bank of Australia and Bank of Japan Meeting Minutes. The New Zealand economy also releases key GDP data and we also a raft of high-impact macroeconomic data being released from the United Kingdom economy.

The eurozone Trade Balance is the difference in value between imported and exported goods and services over a reported period. A positive number indicates that more goods and services were exported than imported and is known as a trade surplus if the exports exceed imports. The Trade Balance is essential for economists to forecast long-term trends in foreign exchange rates.

The Reserve Bank of Australia Monetary Policy Meeting Minutes are published two weeks after the RBA interest rate decision. The RBA Meeting Minutes give a full account of the policy discussion, including factors that influenced policy makers decision and differences of view amongst RBA members. 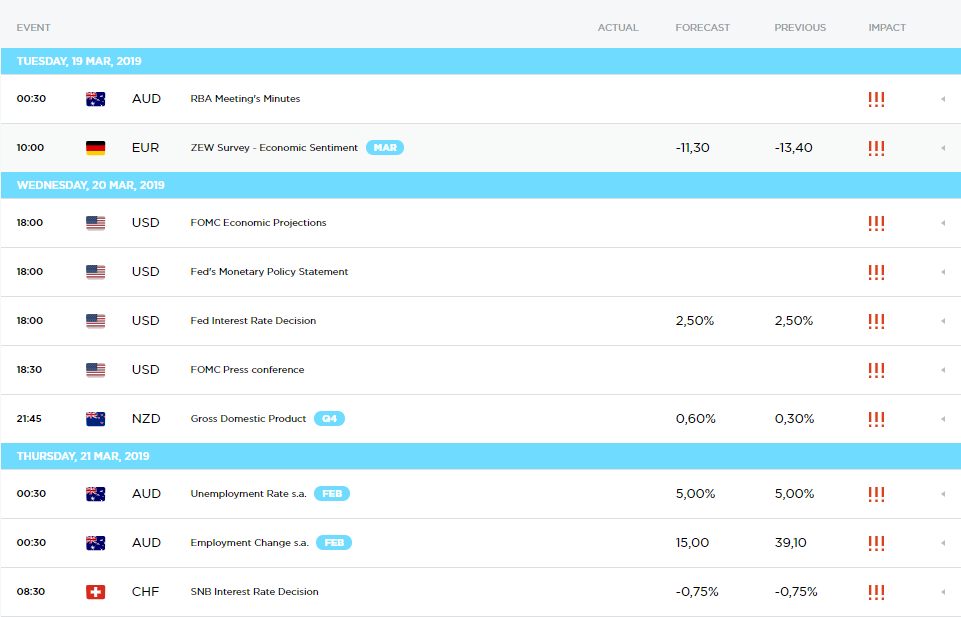 The Federal Open Market Committee meets eight times per year to decide on United States monetary policy and where to set the nations interest rate. Rate changes impact interest rates for US consumer loans, bonds, mortgages and the US dollar exchange rate. The decision of the FOMC policy statement is usually very important, maybe more important than the actual interest rate move made by the central bank, due to it being highly anticipated by market participants. The policy statement includes hints for the future and contains the central bank’s collective outlook on the economy

The Canadian Consumer Price Index is released by Statistics Canada and measures the change in the price of goods and services from the perspective of the consumer. It is the most important indicator of inflation in Canada and the number one measure of inflation the Bank of Canada watches. An increase or decrease in CPI can stimulate the central bank to raise or lower interest rates in order to manage inflation and economic growth.