US economic data heavily in focus during the trading week ahead

During the upcoming trading week traders and investors look to the US Nonfarm Payrolls job report for the month of January and the FOMC interest rate decision for direction. The FOMC is widely tipped to keep rates on hold and maintain a wait-and-see approach, while the American economy is forecasted to have created 168,000 new jobs last month as US hiring stabilizes following December’s seasonal job spike.

We also have a key interest rate decisions from the Reserve Bank of Australia this week, while British Prime Minister Theresa May attempts to pass her Brexit Plan B deal through Parliament. This week we also have a host of global PMI manufacturing data being released and key GDP data for the fourth fiscal quarter from the eurozone economy.

On Tuesday UK Parliament will vote on whether British Prime Minister Theresa May's Brexit Plan B is valid or not. The vote marks the second vote in two weeks after UK Parliament rejected PM May’s first deal. The British Pound is likely to become increasingly volatile before and after the vote, as the chances of a hard Brexit will increase exponentially if the proposed Brexit Plan B is rejected. 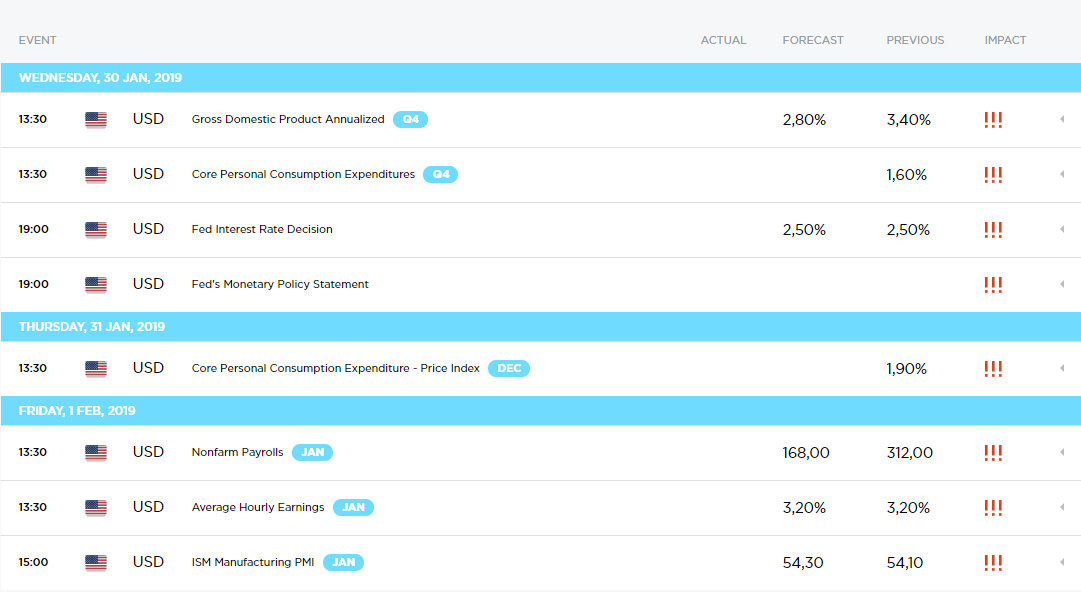 The Reserve Bank of Australia is the central monetary authority for the Australian economy and sets the nations interest rate and the overnight market funds rate. The Reserve Bank of Australia is widely expected to keep monetary policy unchanged this month, maintaining the nations interest rate at a record low, 1.50 per cent. Market participants will be generally wary that the RBA will start to become more dovish, heightening the chances of a potential rate cut this year.

Eurozone Gross Domestic Product is released by Eurostat and measures the total value of all goods and services produced by the overall eurozone economy. Gross Domestic Product is considered a reliable indicator that shows the economic activity and overall health of a economy. The eurozone economy is expected to have expanded 1.2 per cent during the fourth quarter, which is worse than 1.6 per cent figure seen during the same period a year ago.

The NFP job report shows the monthly change in employment in the American economy, excluding the farming sector. Non-farm payrolls is the most carefully observed indicator in the employment situation inside the United States. It is considered the most inclusive calculation of job creation, which causes the Nonfarm Payrolls Job report to become highly significant to market participants, due to the great importance of labour in the United States economy.