During the upcoming trading week, key interest rate decisions from the Bank of England and Swiss National Bank headline the economic calendar. The BOE and SNB are both expected to keep interest rates on hold this week, as the United Kingdom and Swiss economies experience weak economic growth. The Bank of England may acknowledge improving economic data during May, although Brexit uncertainty continues to create headwinds for the UK economy.

Traders also look to the release of the Meeting Minutes from the Reserve Bank of Australia and the Bank of Japan, following their respective policy decisions this month. Central Bank speakers are also out in force this week, with Fed Chair Jerome and ECB President Mario Draghi delivering scheduled speeches to investors.

The minutes of the Reserve Bank of Australia meetings are published two weeks after the RBA interest rate decision. The minutes give a full account of the policy discussion, including differences of view and the record the votes of the individual members of the Committee. Investors will watch the RBA Meeting Minutes release closely after RBA Governor Lowe stated that Australian interest rates would be moving up rather down in the future. 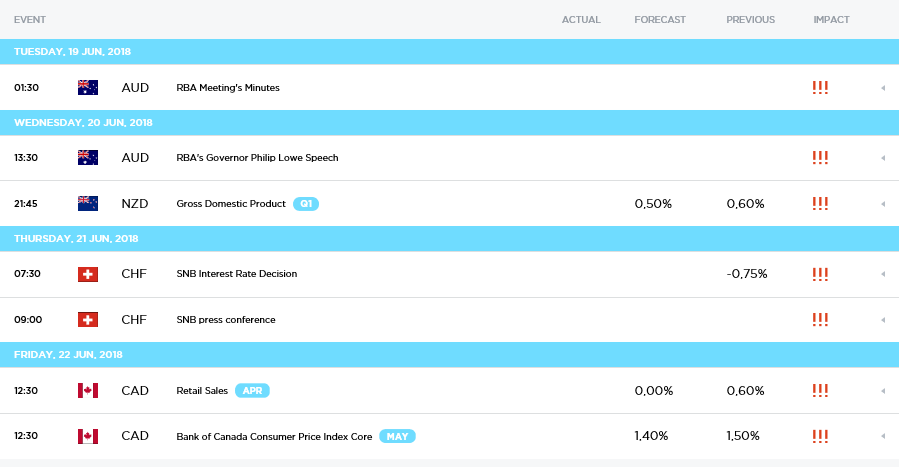 First Quarter Gross Domestic Product represents the official measure of economic growth inside the New Zealand economy for the first three months of the new calendar year. GDP measures the value of all goods and services produced in New Zealand over a specified time. GDP can be deducted using three different approaches, the production approach, the expenditure approach, and the income approach.

The Swiss National Bank conducts the country’s monetary policy as an independent central bank. It is obliged by the Swiss Constitution and by statute to act in accordance with the interests of the country as a whole. Its primary goal is to ensure price stability while taking due account of economic developments. In so doing, it creates an appropriate environment for economic growth.

The Canadian Consumer Price Index is released by the Statistics Canada, and measure the change in the price of goods and services from the perspective of the consumer. It is the most important indicator of inflation in Canada, as a strong increase of CPI can stimulate the central bank to raise interest rates to manage inflation and slow economic growth. Large rises in CPI in a short period indicates periods of inflation and large decreases in CPI during a short usually mark periods of deflation.