TRUMP AND THE FED

During the upcoming trading week, financial market participants face a number of key risk events, as President Donald Trump meets with North Korean leader Kim Jong-Un in Singapore and the FED, ECB, and BOJ decide on interest rates. The Federal Reserve is widely expected to increase US interest rates 0.25 basis points this week, while speculation grows that the European Central Bank will communicate to investors the exit timing of the Central Banks current QE programme. The Bank of Japan is largely expected to keep interest rates on hold and maintain its ultra-loose stance towards fiscal policy.

Industrial Production measures the overall output of the energy sector, factories, mines and utilities inside the United Kingdom economy. Industrial Production is highly significant as a short-term indicator of the stability and efficiency of UK industrial activity. Due to industrial production accounting for a large part of the volatility of the United Kingdom’s Gross Domestic Product, manufacturing trends can be useful for predicting UK economic output.

The Consumer Price Index evaluates fluctuations in the cost of living by measuring the changes in prices consumers pay for a set of items. CPI is used as the headline figure for inflation, as rising inflation reflects a decline in the US dollar’s purchasing power. The Consumer Price Index report keeps track of changes in the price of goods and services that a typical American household may purchase. 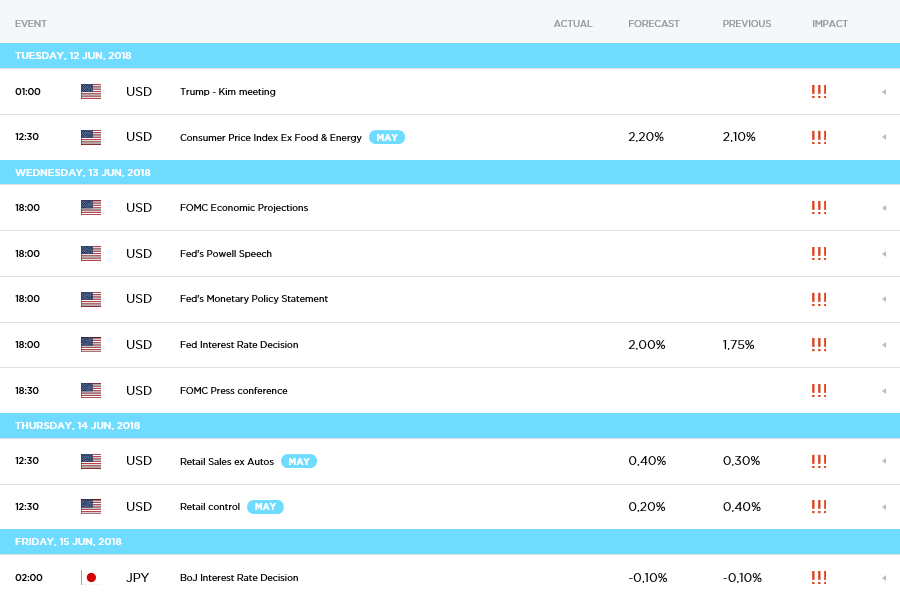 The Federal Open Market Committee members meet eight times per year to decide on monetary policy, and where to set United States interest rate. Rate changes impact interest rates for consumer loans, bonds, mortgages and the US dollar exchange rate. The FOMC policy statement is usually very important, maybe more important than the actual interest rate move made by the central bank, due to it being highly anticipated. This FOMC Monetary Policy Statement usually includes hints for future policy decisions and contains the Federal's collective outlook on the US economy.

After the ECB Interest rate decision is announced, the European Central Bank holds a monthly conference with the current ECB President, Mario Draghi. The main points of the conference are usually inflation and an economic overview or examination of the causes of the ECB's interest rate decision. During the press conference, ECB President Draghi usually gives important clues related to the future monetary policy.

The BOJ Interest Rate Decision released by the Bank of Japan is a consensus amongst the board members of the BOJ on where to set the nations interest rate. The Bank of Japan meets once a month for two days to discuss economic developments inside and outside of the country. Changes in the interest rates have wide consequences for the Japanese economy, affecting consumer loans, mortgages, bonds and the exchange rate of the Japanese yen.