The United States economy takes centre stage this week, as the U.S Federal Open Market Committee come together to decide on where to set the U.S interest rate. According to consensus forecast amongst economists, the FOMC are likely to keep rates on-hold at 1.75 percent, although it remains a close call. The U.S economy also releases the ISM Manufacturing report this week and the Non-farm Payrolls Job report, for the month of April.

Aside from U.S data, we also see the Australian economy heavily in focus, as the Reserve Bank of Australia meet to decide on interest rates. The Australian economy also releases market moving Employment and Unemployment data. After a recent softening of data, we see the German economy release key Retail Sales, Manufacturing and CPI Inflation data for the month of April.

The U.S Core PCE report is greatly valued by the Federal Reserve, mainly due to its capability of forecasting inflationary pressures in the U.S economy. An overall increase of prices may be derived from an excess take in of these high levels of production and consumption. The Fed utilizes a measure of inflation, resulting from the PCE as their primary gauge of inflation. Persistently low Personal Spending however, may lead to decreasing output levels and an economic downturn in the American economy. 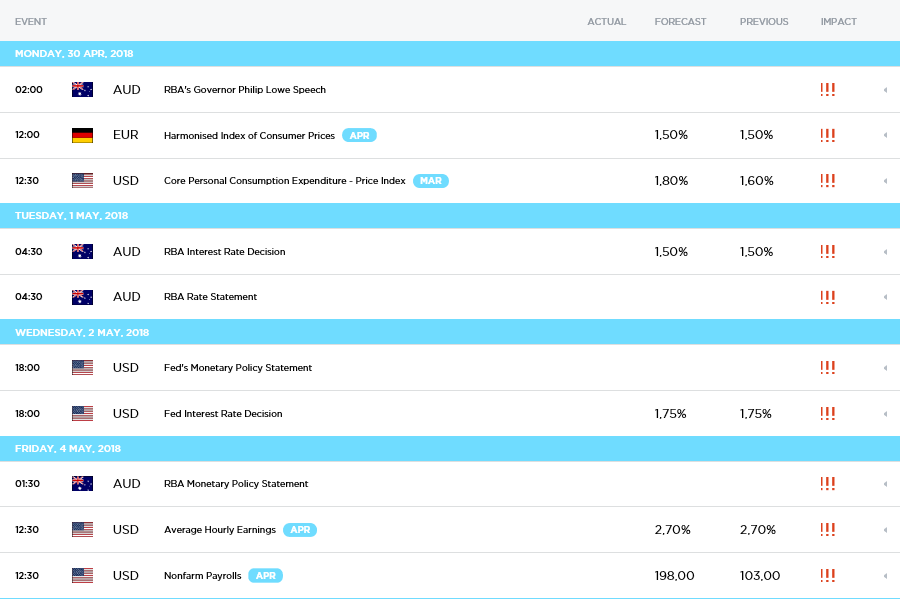 The Consumer Price Index, released by Eurostat, measures the changes in the price of goods and services from the perspective of the consumer. A higher value of the CPI represents significant inflationary pressures in the Euro Zone economies. Higher inflation puts pressure on the European Central Bank to raise interest rates. CPI data may not always affect the euro currency significantly, because CPI is the European Central Bank's mandated inflation target.

The U.S Non-farm payrolls Job report is the most carefully observed indicator in the United States overall employment situation. It is considered the most inclusive calculation of job creation in the U.S, and this characteristic causes the NFP figure to become highly significant, due to the great importance of labour in the United States economy. Most economists agree that the U.S economy will have created 198,000 new jobs during the month of April.