The Canadian economy comes heavily into focus this week, as we see the release of Canadian Retail Sales and Consumer Price Index data, while the Bank of Canada decide on where to set the nations interest rates. The BOC are widely tipped to keep rates on hold, although the policy statement and monetary report will likely create volatility in the Canadian dollar.

Inflation is also heavily in focus this week, with the Swiss, United Kingdom, Eurozone, Japanese and New Zealand economies all releasing annual and monthly CPI inflation data. We also see Retail Sales and Housing data from the United States economy, whilst the Australian economy releases the RBA Meeting Minutes, and key monthly Employment and Unemployment data.

China's Gross Domestic Product is released by the National Bureau of Statistics of China and measures the national income and output for the whole economy. GDP is equal to the total expenditures for all final goods and services produced within the country in a stipulated period of time. Gross Domestic Product remains the primary indicator of the Chinese economies health. 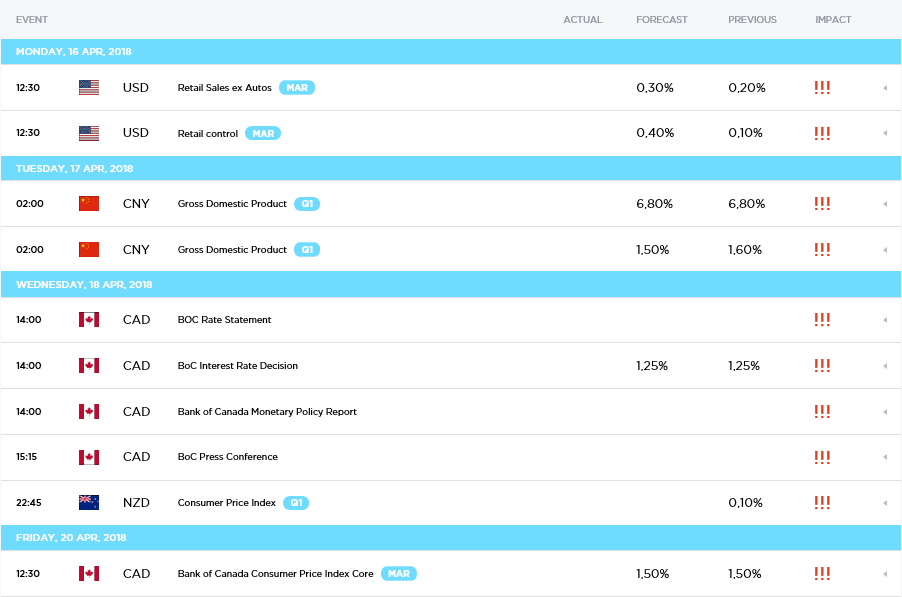 The Bank of Canada Interest Rate Decision is made by the governing council members of the BOC and is focused on where to set the nations interest rate. The Canadian dollar is likely to become volatile before and after the Bank of Canada's decision, as short-term interest rates are the primary factor in a currencies valuation. The BOC also release a policy statement following the decision, which contains the Bank's collective perspective on the economy, and also ideas about future monetary policy.

The Australian Unemployment Rate, release by the Australian Bureau of Statistics, measures the percentage of the total workforce, that is unemployed and actively seeking employment during the previous month. The monthly Unemployment figure has a significant impact on the local currency and stock market, because of the overall importance of employment on the Australian economy.

The Consumer Price Index, released by the Bank of Canada, is a method for measuring inflation. Core CPI excludes energy and food prices, as these prices can be very volatile. It is the most important indicator of inflation for the Canadian economy. An increase in the Consumer Price Index can stimulate the central bank to raise interest rates, with the aim to manage inflation and slow economic growth.