The new Federal Reserve Chair Jerome Powell faces the spotlight this week, as he testifies before both houses of U.S Congress. Investors and traders will be digesting his remarks carefully, as they await clues about future U.S rate increases and clarity on how his tenure as Fed Chair will differ from his predecessor Janet Yellen. Financial markets will also pay close attention to Friday's Non-Farm Payrolls job release, with the wage component of the report under scrutiny as rising inflation in the United States economy remains a contentious issue.

The number of New Home sales is released by the United States Census Bureau and is considered an important measure of current U.S housing market conditions. This month's reading will be closely watched, following a sharp decline recorded in new housing demand during the previous month.  Generally speaking, a higher New Home Sales reading is seen as bullish for the U.S dollar, whereas a low reading is seen as U.S dollar bearish. 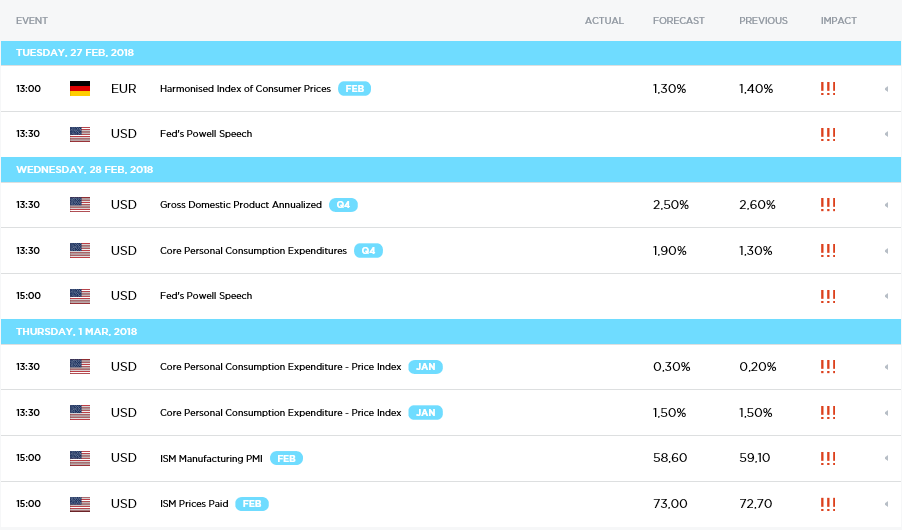 The U.S Federal Reserve utilizes a measure of inflation resulting from the Core Prices Index PCE as their primary gauge of domestic inflation. Persistently low personal spending may lead to decreasing output levels and an economic downturn, as income is either spent or saved.  Economists watch the growth of Personal Spending in relation to income and saving in order to determine if consumers are living beyond their means, which would influence levels of borrowing and future consumption.

The U.S Non-farm payrolls job report is considered the most inclusive calculation of job creation in the United States, excluding the U.S farming sector. This characteristic causes the NFP figure to become highly significant, due to the great importance of labor in the United States economy. The February Non-farm payrolls job report is expected to show 180,000 new jobs created in the U.S economy, which is slightly down on the 200,000 new jobs recorded during the month of January.