The eurozone and China are also heavily in focus in the first full trading week of February, as we see a raft of high-impacting macroeconomic data released from the two economies. On Monday we see key January Retail Sales, Investor Confidence and PMI Services data from the eurozone. Whilst the Chinese economy gives us a steady stream of economic data this week, as we get PMI Services, Import, Export, PPI and CPI Inflation numbers for January.

The eurozone releases key month-on-month Retail Sales data on Monday, with most analysts expecting the January reading to fall into negative territory. Retail Sales measures the sum of goods and services sold monthly at retail outlets across the eurozone trading block. The report also acts as a measurement of consumption and consumer confidence, with a higher headline reading usually signalling economic growth and rising inflationary pressures.

The Reserve Bank of Australia decide on interest rates this week, with most economist expecting the RBA to keep rates on hold at 1.5 percent. The policy statement made by the Reserve Bank Board may express the need for raising rates during 2018, as the global economy accelerates. Generally, the policy statement contains the outcome of bank's interest rate decision and the overall factors that influenced policy makers. 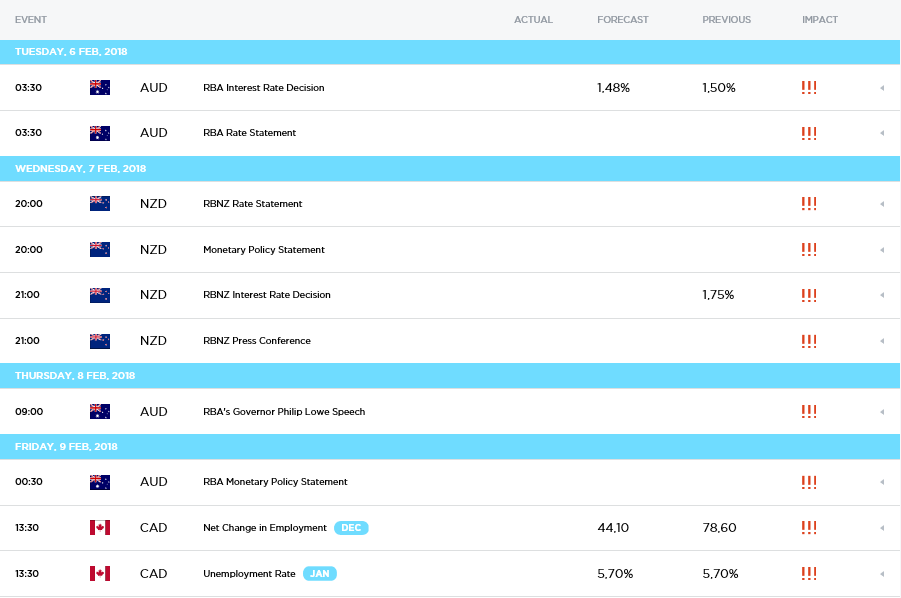 The Reserve Bank of New Zealand is expected to keep interest rates unchanged at 1.75 percent, however, the bank's policy statement may create volatility in the New Zealand dollar. We also see the release of the RBNZ quarterly statement, reporting how the monetary policy statement has been implemented since the last statement's issue. The quarterly MPS outlines how the Reserve Bank proposes to achieve its targets, and how it proposes to formulate and implement monetary policy during the next five years.

The Bank of England are expected to keep rates unchanged at 0.50 percent this week, as the United Kingdom's economy remains uncertain after Brexit. The BOE policy statement is likely to mention UK inflation, and the implications facing the nation's imports and exports, after the recent rise of the British pound against the United States dollar and emerging market currencies.

The January Chinese Consumer Price Index, released by the National Bureau of Statistics of China, measures the change in the price level of a market basket of consumer goods and services purchased by Chinese households. The Consumer Price Index is a key indicator that measures inflation and changes in purchasing trends, as CPI is one of the most frequently used statistics for identifying periods of inflation or deflation.