The United States economy comes heavily into focus this week as the Federal Reserve Bank meet to decide on interest rates, in FED Chair Janet Yellen's last policy meeting as head of the U.S Central Bank. We also get a snap-shot of the current state of the United States economy, with high-impacting Wage, Manufacturing, Housing and Employment data. U.S data aside, we have important CPI inflation data from Germany, and key Manufacturing figures coming out from the Chinese economy, for the month of January.

On Monday we see the release of the Federal Reserve's preferred measure of domestic inflation, the Core Personal Consumption Expenditure Index. The Core PCE Index is the average amount of money that consumers spend in a month, it excludes seasonally volatile products, such as food and energy in order to capture an accurate calculation of the expenditure.

The German economy releases the first look at the Consumer Price Inflation Index for the month of January, with most economists expecting inflation to decline on a month-on-month basis. Consumer Price inflation is an index that measures the changes in the price of goods and services purchased by consumers. 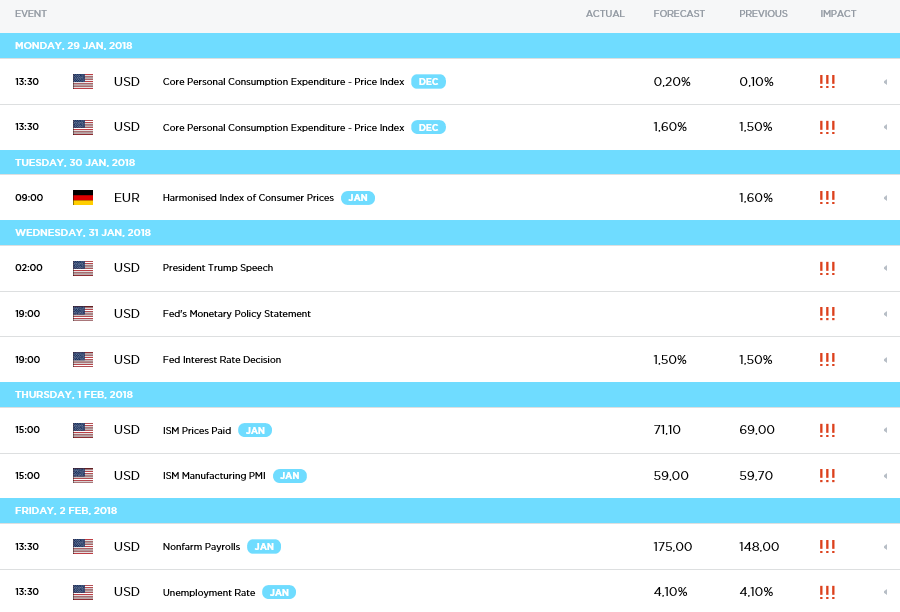 The Federal Reserve Bank are expected to keep U.S interest rates unchanged at the first policy meeting of the new year. Financial market participants will look to the FED's Policy Statement for clues about the timing, and quantity of upcoming rate increases during 2018. Traders and investors will also look closely at the Federal Reserve's language towards domestic inflation, and the broader health of the United States economy.

The Chinese Manufacturing PMI for the month of January is expected to have declined from the previous month reading, although it still remains above the 50-reading needed to show Manufacturing expansion. The Purchasing Managers Index is a composite indicator that offers an overall view of the activity in the Chinese manufacturing sector, and acts as a leading indicator for the whole economy.

The U.S Nonfarm Payrolls Job Report shows the monthly change in employment inside the American economy, and excludes the farming-sector. The Non-Farm Payrolls Job Report is expected to show that 175,000 new jobs were created in January, whilst the Unemployment Rate is expected to hold steady at 4.10 percent. The Non-Farm Payrolls Report is the most carefully observed indicator in the U.S employment situation, and It is considered the most inclusive calculation of job creation in the United States.