Aside from the BOC interest rate decision, investors and traders will look to key CPI inflation data for the month of December, from the United Kingdom and the eurozone. As the trading week draws to a close, we get a snapshot of the Chinese economy, as fourth quarter GDP numbers are released. We also see market moving December employment and unemployment figures, coming out from the Australian economy.

The United Kingdom economy releases key CPI inflation figures for December on Tuesday, with most economists predicting that UK CPI will have increased by 0.4 percent on a month-on-month basis.

The Consumer Price Index measures the change in the price of goods and services from the perspective of the consumer. It is a key way to measure changes in purchasing trends and inflation. 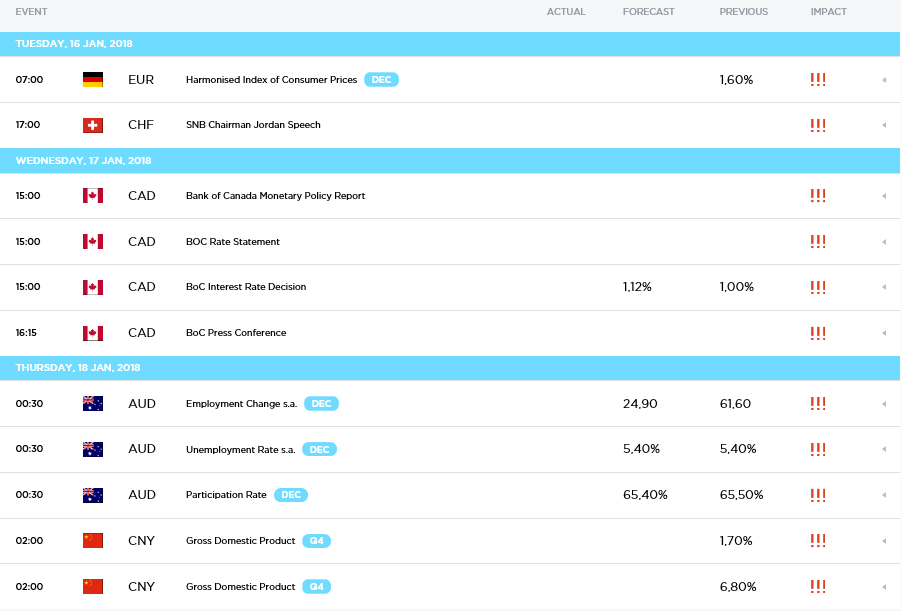 Bank of Canada governing council members come to a consensus on where to set the rates on Wednesday. The Bank of Canada are expected to raise interest rates by 0.25 percent, as the domestic economy continues to improve.

Gross Domestic Product measures the annualized change in the inflation-adjusted value of all goods and services produced by the economy. It is the broadest measure of economic activity, and the primary indicator of the economy's health.

Official data from the Office for National Statistics, is expected to show that UK Retail Sales slumped -0.6 percent during the month of December.

Retail Sales measure the change in the total value of inflation-adjusted sales at the retail level. It is the foremost indicator of consumer spending, which accounts for the majority of overall economic activity.