During the upcoming trading week, financial markets will be focused on the release of CPI inflation data from the United States and Chinese economies. The U.S CPI release will likely set the tone for the U.S dollar and stock markets, as the Federal Reserve remains concerned about subdued domestic inflation, despite strong economic and jobs growths in the Amercian economy.

We also see Retail Sales figures from the eurozone, Chinese, Australian and U.S economies, which will give investors a good indication of year-end spending patterns and global consumption. The UK economy is also in the spotlight, with the release of Manufacturing and Industrial production figures for the month of December.

The Swiss economy releases key CPI inflation figures for the month of December, with most economists expecting that month-on-month inflation will again decline, falling -0.1 percent. Year-on-year inflation is however expected to have increased by 0.8 percent, which is in-line with the same period last year.

U.S jobs openings are expected to have increased during the month of November, as more American companies seek full and part-time workers. The JOLTS jobs opening survey helps to measure job vacancies in the U.S economy, it collects data from employers about employment, job openings, recruitment, hires and separations. JOLTS only defines job openings, as all positions that are open on the last business day of the month.

The Chinese economy releases key December CPI inflation data on Wednesday, with most economists expecting CPI to start to move higher. Monthly CPI is expected to have increased by 0.4 percent, while year-on-year CPI is forecasted at 1.9 percent.

The Consumer Price Index measures the change in the price of goods and services, from the perspective of the consumer. It is a key way to measure changes in purchasing trends and inflation in the Chinese economy. 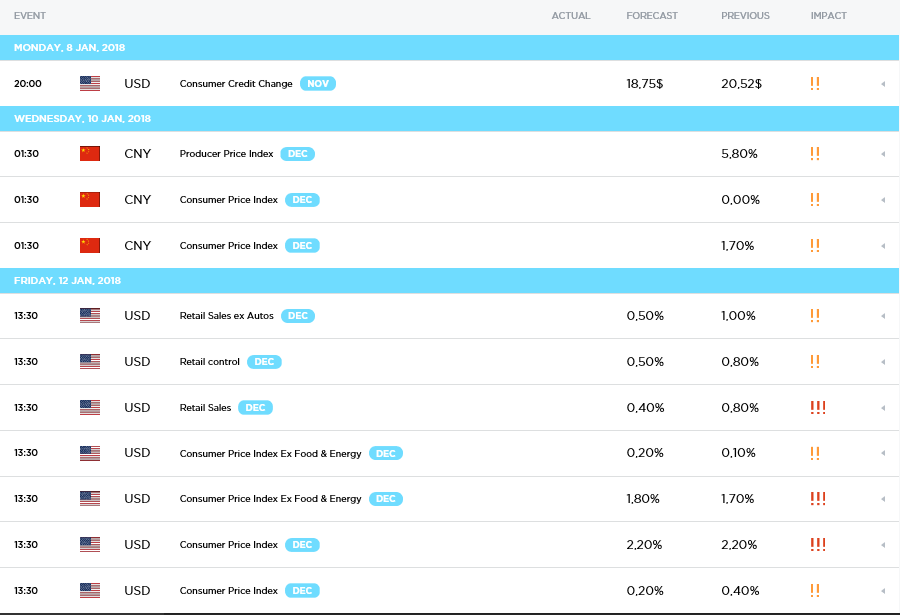 Australian Retail Sales are expected to have increased 0.4 percent during the month of December, which is marginally lower than the previous months 0.5 percent reading.

Retail Sales measure the change in the total value of inflation-adjusted sales at a retail level. It is the foremost indicator of consumer spending, which accounts for the majority of overall economic activity.

Most economists expect that U.S inflation will have increased 0.2 percent during the month of December, which is worse than the previous months 0.4 percent reading. Year-on-year CPI inflation is also expected in at 2.1 percent, which is slightly lower than the 2.2 percent seen at the same period last year.