GLOBAL MANUFACTURING AND U.S JOBS DATA RELEASED IN A BUSY START TO 2018

Despite financial markets being closed for New Year's Day on Monday, the first trading week of 2018 still promises a flurry of high-impacting economic data releases. Traders and investors will process key December Manufacturing data from the Chinese, eurozone, United Kingdom and United States economies from Tuesday onwards. We also see December Unemployment figures from the German economy, and the previous months CPI figures for the eurozone trading block.

The main event for financial market comes on Friday, as the American economy releases the December Non-Farm Payrolls job report. Economists expect that the U.S economy created 189,000 in the last month of 2017, whilst the overall U.S unemployment is expected to stay at a record-low 4.10 percent.

Financial markets and banks across the globe are closed due to New Year's Day. 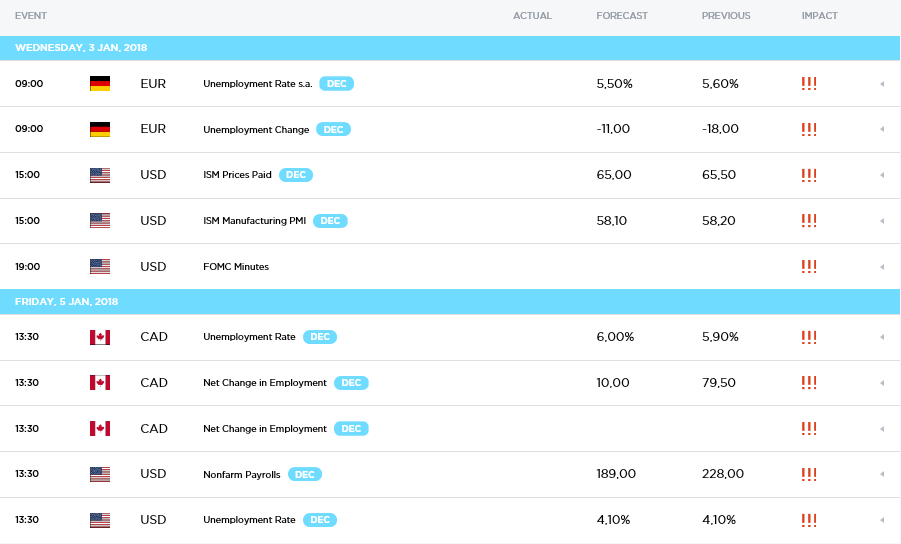 The U.S Institute of Supply Management Manufacturing Purchasing Managers Index is expected to remain at multi-year records levels for the month of December.

The report is based on data compiled from monthly replies to questions asked of purchasing and supply executives in over 400 industrial companies. Each of the indicators measured is based on New Orders, Backlog of Orders, New Export Orders, Imports, Production, Supplier Deliveries, Inventories, Customers Inventories, Employment, and Prices.

The United Kingdom's Services Purchasing Managers Index is expected in at 54.1 for the month of December, which marks an improvement from November's reading. The Services PMI measures the activity level of purchasing managers in the UK's services sector. Traders watch these surveys closely as purchasing managers usually have early access to data about their company’s performance, which can be a leading indicator of overall economic performance.

The U.S Nonfarm Payrolls jobs report measures the change in the number of people employed during the previous month, excluding the farming industry. Job creation is the foremost indicator of U.S consumer spending, which accounts for the majority of economic activity.

A higher than expected reading should be taken as bullish for the U.S dollar, although financial markets increasingly look to the wage increase component inside the survey, as U.S inflation remains low.