Traders should also expect reduced volumes and volatility in the foreign exchange, bond and stock markets between Thursday and Friday, as the United States and Japanese economies observe Thanksgiving holiday.

The German economy releases key Producer Price Index inflation figures for the month of October, which measures the change in the price of goods sold by manufacturers.

Economists are expecting the monthly German PPI figures to increase by just 0.1 percent month-on-month, which is a marginally down from the 0.3 percent increase seen during the previous month.

The Reserve Bank of Australia Monetary Policy Meeting Minutes are a detailed record of the bank's most recent policy-setting meeting, containing in-depth insights into the economic conditions that influenced the rate decision.

Reserve Bank of Australia Governor Philip Lowe is also set to speak after the Minutes are released. Governor Lowe has considerable influence over the value of the Australian dollar, traders scrutinize his public engagements for clues regarding future monetary policy.

This month's release takes on extra significance, as the FED are widely expected to increase the U.S interest rate at their next policy meeting in December.

South African policymakers come together on Thursday to decide on the interest rate, at which the private sector banks borrow South African rands from the SA Reserve Bank. The current rate of interest sits at 6.75 percent in the South African economy.

Following continued strong growth in the German manufacturing sector during the third fiscal quarter, all three components of the IFO survey are expected to remain close to record highs. 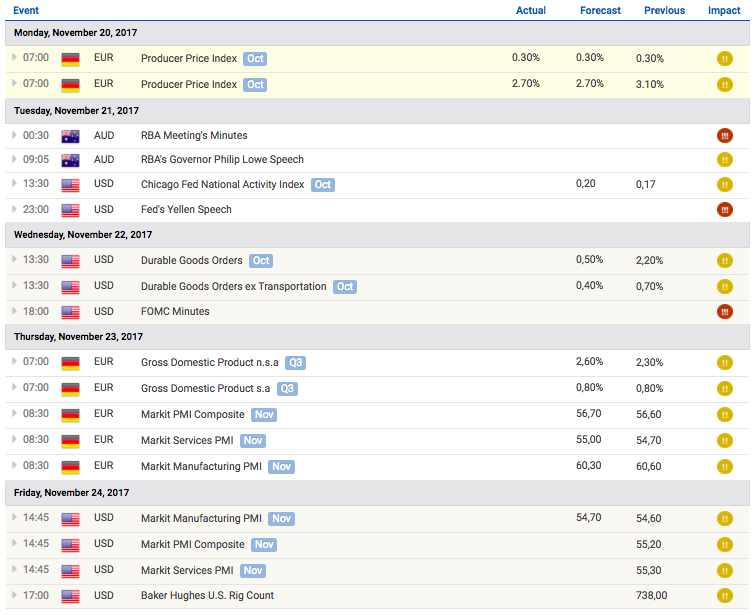